Dr. Shoo Lee is a neonatologist and health economist. He is the past Scientific Director of the Institute of Human Development, Child and Youth Health (IHDCYH) at the Canadian Institutes of Health Research (CIHR); and is currently Professor of Pediatrics, Obstetrics & Gynecology and Public Health; Staff Neonatologist and Director of the Maternal-Infant Care (MiCare) Re-search Centre at Mt. Sinai Hospital and Senior Clinician Scientist of the Lunenfeld-Tannenbaum Research Institute. He is the founder and Chairman of the Canadian Neonatal Network and the Chinese Neonatal Network, and leads the CIHR Team in Maternal-Infant Care. Dr Lee fosters collaborative research, and focuses on improving quality of care, patient out-comes and health care services delivery. He pioneered the Evidence-based Practice for Improv-ing Quality (EPIQ) program for quality improvement and Family Integrated Care (FiCARE) model as a paradigm of care in the neonatal intensive care unit. Awards for his work include the Officer of the Order of Canada appointment from the Governor-General of Canada, the Magno-lia Gold Award from the Shanghai Government, the Doctorats Honoris Causa from Laval Uni-versity, the Douglas K Richardson Award for Lifetime Achievement in Perinatal and Pediatric Healthcare Research from the Society for Pediatric Research, the Distinguished Neonatologist Award and the Aventis Pasteur Research Award from the Canadian Pediatric Society, and the Honorary President appointment from Xiamen Children’s Hospital.

Dr Prakesh Shah is Pedaitrician-in-Chief at Mount Sinai Hsopital and a Professor in Department of Pediatrics and Institute of Health Policy, Management and Evaluation at the University of Toronto, Canada. He is the director of the Canadian Neonatal Network (CNN) and an Interna-tional Network for Evaluation of Outcomes of Neonates (iNeo) whereby he oversees a project of benchmarking outcomes of very low birth weight neonates in eleven countries with popula-tion-based neonatal networks with a final aim of improving quality of care across 240 NICUsparticipating in the network. He is also a CO-PI evaluating pre-conceptional, prenatal and post-partum interventions to develop healthy trajectories of growth in a cluster randomized trial in Southern India. His areas of interest include Patient and Disease oriented research in neonatal-perinatal medicine, Health services and Epidemiological research in Maternal-Newborn care, Knowledge synthesis and Quality improvement. He has evaluated and produced policy docu-ments on interventions and programs for primary, secondary and tertiary prevention of preterm birth for provincial and national agencies. He is engaged in several policy and advocacy work with his role in executive committees and advisory board membership as local, provincial, na-tional and international levels. He currently leads the Canadian neonatal Quality improvement initiative.

Disclosure:
The series “Neonatal Networks for Outcomes Improvement: Evolution, Progress and Future” was commissioned by the editorial office, Pediatric Medicine without any sponsorship or fund-ing. Shoo K. Lee and Prakesh Shah served as the unpaid Guest Editor for the series. 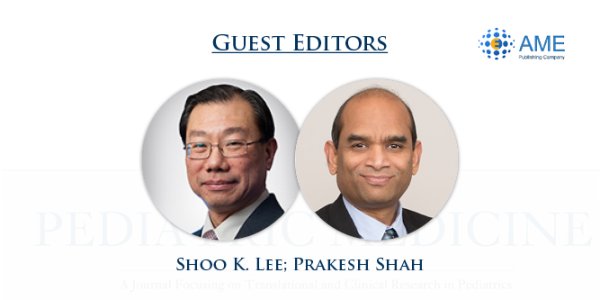