Infants born preterm and hospitalized in the neonatal intensive care unit (NICU) are frequently reported to have symptoms associated with gastroesophageal reflux (GER) (1). During hospitalization, preterm infants diagnosed with GER have longer lengths of stay and higher medical costs than infants without GER (1-3). The trajectory of change in symptoms over the first months of life after hospital discharge from the NICU and the influence of gestational age at birth on GER symptomatology during these post-discharge months is not well understood. GER symptoms during this time are important because they are associated with feeding difficulties (4), which may impact the infant’s growth and development. The objective of this study was to describe symptoms of GER across the first 6 months of life in infants based on gestational age at birth. Additionally, factors known at the time of birth were explored for their association to later GER symptoms. We present the following article in accordance with STROBE guidelines for cross-sectional studies (5) (available at http://dx.doi.org/10.21037/pm-20-100).

This was a descriptive, cross-sectional study of parent-reported symptoms of GER in infants. The authors are accountable for all aspects of the work in ensuring that questions related to the accuracy or integrity of any part of the work are appropriately investigated and resolved. This study was conducted in accordance with the Declaration of Helsinki (as revised in 2013) and was approved by the University of North Carolina (IRB number 16-2706), Boston College (IRB numbers 18.087.01 and 19.287.01), and Atrium Health (IRB number 09-19-34E) institutional review boards. Informed consent was taken from all individual participants.

Data were collected and managed using online surveys on the Qualtrics (Provo, UT) platform and REDCap electronic capture tools hosted at Atrium Health (6,7). Participants were recruited from a variety of sites, including infants discharged from the NICUs of Atrium Health Levine Children’s Hospital and University of North Carolina Children’s Hospital; infants cared for in the pediatric primary care clinic and the feeding and swallowing clinic at the University of North Carolina; Researchmatch.org, a national health volunteer registry supported by the National Institutes of Health and the Clinical and Translational Science Award (CTSA) program; Join the Conquest, a health volunteer registry through the CTSA program at the University of North Carolina; Qualtrics respondent panels; online parent support groups; and an informational email sent to faculty, staff, and students at the University of North Carolina at Chapel Hill. Data collection occurred between January 2017 and November 2020. To be eligible for participation, parents had to be at least 18 years old, self-identify as being able to read English, have access to the internet to complete the survey, and have an infant less than 6 months corrected gestational age.

To be included in the full-term infant group, infants had to be ≥37 weeks gestation at birth and the parent had to indicate that the infant did not have any of the following conditions: genetic disorder, cystic fibrosis, congenital diaphragmatic hernia, chronic lung disease, developmental delay, metabolic disorder, epilepsy, hearing or vision impairment, feeding problem, diagnosed food allergy in the infant, or structure abnormality involving the face, mouth, or gastrointestinal tract. To be included in the preterm infant group, the infant had to be <37 weeks gestation at birth.

Corrected age at time of study

Factors known at time of birth

Parents were asked several additional questions about the infant’s birth and family history that were used to explore possible contributing factors to later symptoms of GER. Specifically, parents were asked to report the infant’s sex assigned at birth (i.e., male or female), mode of birth (i.e., vaginal delivery or cesarean section), and whether there was a family history (defined as siblings, parents, or grandparents) of food allergies (i.e., yes or no).

Symptoms of GER were measured using the Infant Gastroesophageal Reflux Questionnaire-Revised (I-GERQ-R). The I-GERQ-R is a 12-item parent-reported questionnaire about symptoms of GER in the seven days prior to the questionnaire being completed. Individual items were used to calculate a sum total score with a possible range from 0 to 42, with 0 indicating no symptoms of GER and scores increasing with added symptom burden. The I-GERQ-R has adequate psychometric properties, including internal consistency reliability, test-retest reliability, construct validity, and discriminate validity (8-10). Internal consistency reliability of the 12 items on the I-GERQ-R was acceptable in this sample of 582 infants (Cronbach’s alpha =0.75).

An a priori power analysis [G*Power 3.1.9.7, Düsseldorf, Germany) determined that a sample of at least 17 infants within each gestational age group (i.e, <32 0/7 weeks, 32 0/7–36 6/7 weeks, and ≥37 weeks)] would be sufficient to achieve 95% power with an alpha of .05 (two-tailed) given an effect size of 1.3 for the primary outcome of I-GERQ-R total score. An effect size of 1.3 was chosen based on the average of the standardized mean differences reported in a meta-analysis (11) of seven studies that used the I-GERQ-R (12-18). We also sought to have an approximately equal distribution across age groups (0–2 months, 2–4 months, and 4–6 months). To be included in the analysis, there had to be no missing data on the 12 I-GERQ-R questions.

Data from 582 unique infant cases were included in the analysis. Characteristics of the infant sample are included on Table 1. Demographic information about the infants and their families are provided on Table 2. The vast majority of participants (n=574) were located in the United States of America. Of the eight participants not from the United States, there were three from Canada, two from the United Kingdom of Great Britain and Northern Ireland, and one each from Malaysia, Mexico, and Turkey.

Demographic characteristics of the sample (N=582) 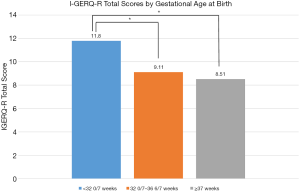 Corrected age at time of study

Factors known at time of birth

In this study, infants born <32 0/7 weeks were found to have more symptoms of GER than infants born at later gestational ages. The pathophysiologic mechanisms for the increased symptoms of GER in these populations of infants are not well understood, but may be related to several factors known to be related to prematurity. There may be developmental alterations in the gastrointestinal tract related to early exposure of the immature gut to microbes (19) or changes related to gastrointestinal injury (e.g., necrotizing enterocolitis) that impact later gastrointestinal functioning (20). Infants born preterm are also known to experience alterations to the gut microbiome (21) that may impact their symptoms of GER. Chronic, toxic stress related to prolonged hospitalization and the frequent, painful events associated with interventions common to newborn intensive care of the infant born prior to 32 weeks, may contribute to inflammation (22) along the gastrointestinal tract and epigenetic changes to glucocorticoid receptor function that may impact the infant’s inflammatory response (23). Infants born prior to 32 weeks also frequently experience respiratory disease and growth faltering, which may require increased feeding volumes and nutritional changes, that may contribute to GER symptoms (24).

The mechanisms behind why preterm infants do not have an improvement in symptoms in the same way is not understood. It may be related to delays in development of truncal stability, differences in vagal tone related to the stresses of NICU hospitalization, inflammation along the gastrointestinal tract (29), or differences in the type of nutrition provided. A diet of exclusively human milk is associated with fewer symptoms of GER (30). Infants born preterm are fed human milk for shorter periods of time than infants born full-term (31,32) and are often fed human milk or formula with added calories, protein, or fat to enhance growth (33,34). Additives may increase the osmolality of the human milk or formula (35), which may have an effect on the infant’s digestion and GER symptoms. In some cases, the increased osmolality may decrease symptoms of GER, while in other cases, symptoms may increase. In preterm infants who are receiving human milk, separation of the mother and baby during hospitalization may result in the infant receiving human milk by bottle rather than directly at the breast, which may alter their microbiome (36). The timing of introduction of solid foods, whether it is prior to 4–6 months corrected gestational age or within the range of 4–6 months chronological age, may also impact the developing microbiome (37,38) and symptoms of GER.

The main limitation of this study was that the sample sizes of preterm infants within each gestational age cohort were relatively small and the data were cross-sectional. Future studies should seek to include larger sample sizes by gestational age cohort and follow these infants longitudinally to provide better data on the trajectory of change over time. Additionally, to be included, participants had to have access to the internet and a device to complete the online survey; while this allowed for accessing a large, geographically diverse sample, it may result in bias within the sample. Finally, 65% of the participants identified their infant as being white. While the proportion of the sample who identified as white was less than that of the US population, where 76.3% of the population identified as white according to 2019 US Census Bureau data (https://www.census.gov/quickfacts/fact/table/US/PST045219), the sample under-represents infants who identify as Black or African American, Asian, and Hispanic or Latino. Interestingly, 14% of the sample identified their infants as being of more than one race, which is higher than that reported in the US Census data. Generalization of these findings should take this limitation into consideration. Future studies should aim to include a more racio-ethnically diverse sample.

Infants born prior to 32 weeks gestation experience more symptoms of GER than infants born at later gestational ages across the first 6 months of life. While full-term infants’ GER symptoms improve, preterm infants, regardless of degree of prematurity, fail to show improvement in symptoms across the first 6 months. In addition to greater degree of prematurity and younger age, a family history of allergy was found to be related to increased symptoms of GER. This study provides important information about the gastrointestinal health of preterm infants during the relatively understudied period of time after neonatal intensive care discharge.

The first year of life after neonatal discharge is a critical time for growth and development and much more research is needed to understand the morbidities associated with preterm birth that may impact their health during this critical time. Additional research involving larger samples of preterm infants are needed to understand the mechanisms for increased GER symptomatology in infants born before 32 weeks gestation. Understanding these mechanisms will allow for development of targeted management strategies. Additionally, research is needed to understand why full-term infants improve in terms of GER symptoms, but preterm infants do not. Understanding the mechanisms for these differences in trajectories of symptoms will not only allow for targeted treatment, but improve our understanding of the ideal time to implement management strategies in preterm infants. Exploration of GER symptoms in preterm and full-term infants beyond 6 months of life will help to elucidate how these trajectories evolve as children continue to mature and their diets change to incorporate solid foods.

Provenance and Peer Review: This article was commissioned by the Guest Editor (Steven M. Barlow) for the series “Neonatal Feeding and Developmental Issues” published in Pediatric Medicine. The article has undergone external peer review.

Reporting Checklist: The authors have completed the STROBE checklist. Available at: https://pm.amegroups.com/article/view/10.21037/pm-20-100/rc

Conflicts of Interest: All authors have completed the ICMJE uniform disclosure form (available at https://pm.amegroups.com/article/view/10.21037/pm-20-100/coif). The series “Neonatal Feeding and Developmental Issues” was commissioned by the editorial office without any funding or sponsorship. KG is a consultant with Astarte Medical. The other authors have no conflicts of interest to declare.

Ethical Statement: The authors are accountable for all aspects of the work in ensuring that questions related to the accuracy or integrity of any part of the work are appropriately investigated and resolved. This study was conducted in accordance with the Declaration of Helsinki (as revised in 2013) and was approved by the University of North Carolina (IRB number 16-2706), Boston College (IRB numbers 18.087.01 and 19.287.01), and Atrium Health (IRB number 09-19-34E) institutional review boards. Informed consent was taken from all individual participants.