Constipation in the critically ill child

Constipation in the critically ill child is a poorly studied disease which can represent up to 50% of children admitted to Pediatric Intensive Care Units (PICU) (1-3). López et al. studied 150 critically ill children with a constipation incidence of 46.7%. Constipation was independently associated with body weight, Pediatric Index of Mortality 2 score, postoperative PICU admission and vasoconstrictor drugs (1). Smalley et al., in their pilot study with 47 patients (observation period of 219 days) found that those children spent 56.7% of this time without any bowel movements (3).

Constipation has been classically considered just a symptom due to a difficult bowel movement with hard and a small number of stools (13). It has also been defined more as a secondary symptom to fecal impaction rather than a disease itself (14). The lack of a widely accepted definition is, in part, due to the absence of clear criteria about what a normal bowel movement is. This is a handicap for the development of studies about constipation (14,15).

The European Society of Intensive Care Medicine (ESICM) Working Group on Abdominal Problems, did not reach a common definition for constipation in critically ill adults because these patients may not express symptoms such as uncomfortable or infrequent bowel movements, hard stool or painful defecation. So they suggested to use the term paralysis of lower gastrointestinal (GI) tract which was defined as the inability of the bowel to pass stool due to impaired peristalsis (11). The main clinical sign of the paralysis of lower GI track was the absence of stools for three or more consecutive days without mechanical obstruction as this time criteria was the most extended in published studies (5,7,11,12). However, other authors set longer periods to define constipation (8,9,19,20).

In the few studies published about constipation in critically ill children, it was applied the same time criterion (three days without bowel movements) (1) or the stool consistency (types 1 or 2 from the Bristol stool chart) (3).

GI tract dysmotility is a common disorder in critically ill patients and it can affect every part of the GI tract. GI motility disturbances in the last parts of the small intestine, colon and rectum have the primary but not the sole responsibility for constipation (5,7-9).

Interstitial cells, hormones and enterogastric and gastrocolic reflexes interact with the myenteric plexus which is the main responsible for peristalsis (21,22). A decrease in intestinal contractility with migratory motor complex disturbances are among the main causes of GI tract dysmotility (22). Some common situations in critically ill patients like hyperglycemia, hypokalemia, hypophosphatemia or hypomagnesemia have been associated with lower motility in the duodenum and jejunum. Hypoxia and hypercapnia can cause a malfunction of the myenteric plexus too (23,24). Moreover, sepsis and edema have also been associated with GI dysmotility (21,25,26).

Colon, rectum and sigmoid function has been less studied in the critically ill patient although dysmotility in this area is the second most frequent cause, right after delayed gastric emptying. The physiopathology is barely understood yet and the most accepted hypothesis is that there is an imbalance in colonic autonomic innervation. These disturbances are frequently extended in patients after strokes, heart attacks, peritonitis, sepsis and major surgeries (27).

In addition, there are multiple and frequent factors in critically ill patients which negatively affect one or several sections of the GI tract: mechanical ventilation, analgesic drugs (opioid or non-opioid) or inotropes, splanchnic hypoperfusion, immobility and delay in the onset of enteral nutrition (EN) (5,7-9,11,19,21,22,28-32).

Constipation symptoms in the pediatric critically ill patient depend on severity and time from illness onset. At the beginning, clinical findings are very similar to functional constipation with no bowel movements, abdominal pain and distension. Infants can show irritability, inconsolable crying or even feeding reluctance (14,33-35). In the critically ill child, abdominal distension secondary to constipation may be a cause of respiratory distress.

Constipation is exclusively a clinical diagnosis. Probably some criteria as stool frequency and consistency should be used to provide a more thorough definition of constipation in critically ill children. Considering stool frequency (i.e., more than 3 days without a bowel movement) according to the ESICM Working Group on Abdominal Problems criteria, could be reasonable to use as it is the most widely accepted criteria in published studies in adults, and children trend to have a GI transit time shorter than adults (1). Regarding stool consistency, stools from type 1 and 2 on the Bristol Stool Form Scale, could also be accepted as a valid criterion since this scale has been validated in pediatric population (39,40).

There are different tests to study GI motility disorders. The more specific techniques for the lower GI tract are the following:

Sometimes, there are other tests that may be necessary to identify any other underlying organic disorder:

Despite the huge amount of different diagnosis tests that exist, most of them have not been validated for pediatric population while others are too invasive to order them routinely. Because of that, none of them are recommended as a first choice for the diagnosis of constipation (16-18,59). Moreover, some of these options are not available in critically ill patients because they cannot be moved due to their instability.

In critically ill adults, some authors have suggested the development of constipation risk scores to improve constipation diagnosis and start prophylactic treatments, but there is no publication about it in pediatric populations (43,61). These scores could allow physicians to start treatments before complications occur.

Different studies have highlighted the importance of developing protocols for constipation management in critically ill patients (1,2,5,7,22,61,62,63). Constipation needs a two-phase treatment. Thus, fecal impaction should be treated before starting a maintenance treatment. In both situations, laxatives are the treatment of choice (Table 1) (59,61-67). 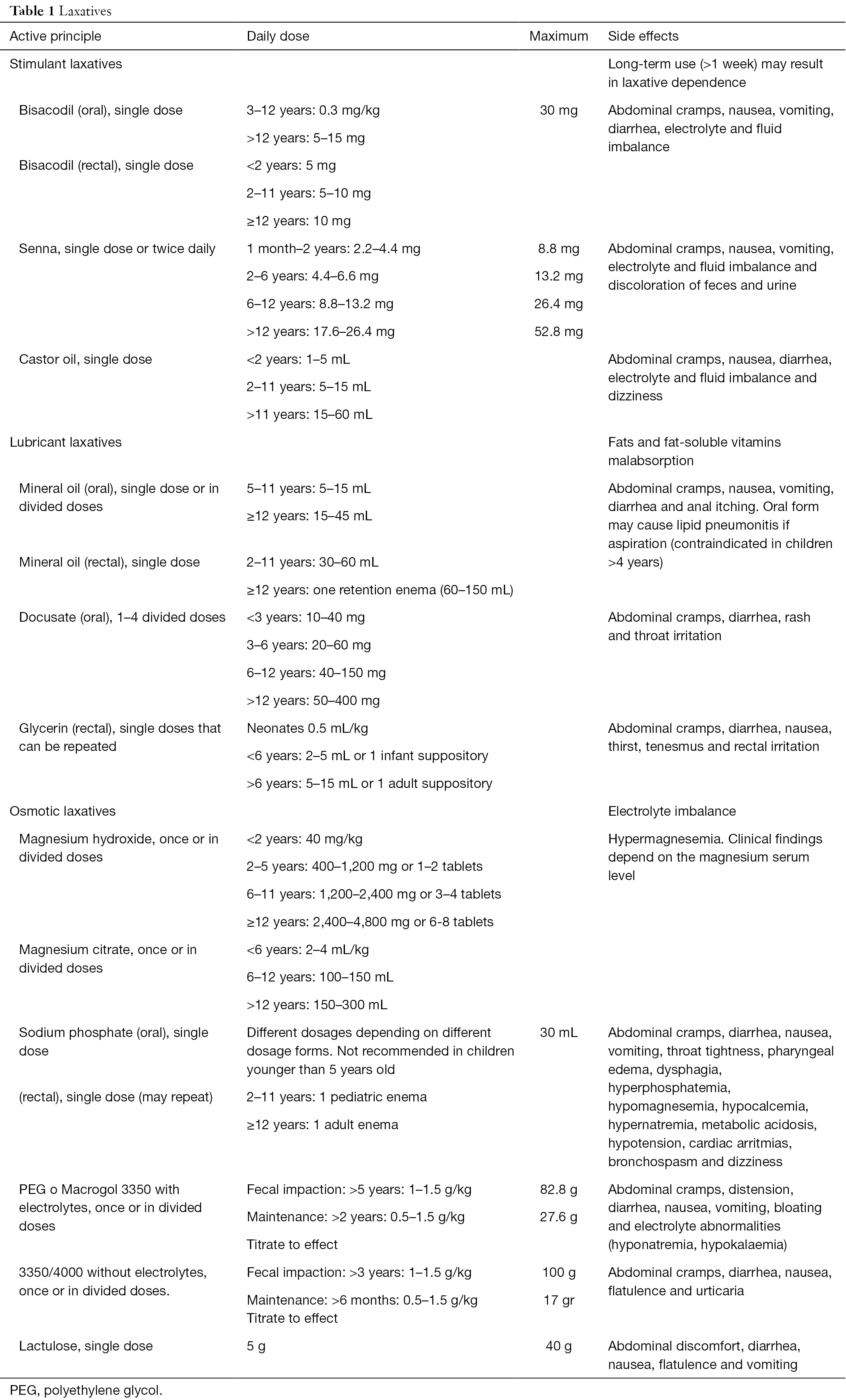 Laxatives can be used to treat fecal impaction and as maintenance treatment, but laxative type, route of administration and dosage can be different for each treatment option (14-18). The most common side effects reported are diarrhea, gas, bloating, cramping abdominal pain and abdominal distension. The frequency of the side effects associated depends on the type of laxative. Most of them are contraindicated in patients with bowel obstruction (4,14-16). Laxatives can be classified into different groups (Table 1):

Although manual evacuation of the bowel (under anesthesia or not) is a valid option, it is not recommended unless optimum treatments have failed. Pharmacologic disimpaction treatment can be administered through oral or rectal administration. No clear evidence exists to demonstrate higher efficacy of any over the other (68,69). The oral treatment is preferred for maintenance and osmotic laxatives are preferred because they are well tolerated and they do not alter any nutrient absorption (64,66).

In critically ill patients (adults and children), the most common laxatives used were polyethylene glycol (PEG), lactulose, Senna (which active component are Sennosides A and B), milk of magnesia, castor oil and enemas containing phosphate (6,20,37,62,64,70). PEG (with or without electrolytes) and lactulose are the most widely used and recommended by international guidelines in pediatric patients (64).

Macrogol (generic name) or PEG (chemical name) is a high molecular weight polymer capable to absorb up to 100 water molecules for every molecule of PEG. Hence PEG draws water into the stool, improving stool consistency and frequency. There are two PEG molecules according to their molecular weight (PEG 3350 and PEG 4000) with no differences between them. PEG 3350 can be supplemented with electrolytes to increase its osmotic strength (64,65,71).

Lactulose is a nonabsorbable synthetic disaccharide that is partially metabolized by the bacterial flora of the colon decreasing intestinal pH. Lactulose is the best studied osmotic laxative (64,65).

No significant differences were found by van der Spoel et al., between PEG and lactulose in critically ill adults in a randomized, double-blind, placebo-controlled trial (37). However, it has been found that PEG is superior to placebo and lactulose in functional constipation in the pediatric population (69-72). Actually, PEG is the first line drug for functional constipation in children while lactulose is a good alternative in case of PEG intolerance (16-18). But there are no published studies in critically ill children.

In critically ill patients, opioid treatments represent a cause of constipation. Opioid-induced constipation (OIC) is the most common gastrointestinal adverse event in patients with chronic pain under opioid therapy. The prevalence of OIC is directly related to the time that the opioids are needed (73-75). A lot of different drugs are available to treat OIC (Table 2), but only small retrospective case series of some of these treatments in critically ill children have been published (76-80). Their pharmacokinetic, pharmacodynamic and safety should be studied in this population. Furthermore, constipation in critically ill children is multifactorial, so these treatments are usually not recommended as a first-line treatment. Potentially, the use of sedation protocols to reduce opioids needs may help to decrease OIC and control one of these factors for constipation in the critically ill child, but there are no studies to verify this

Other drugs, such as neuromuscular blocking agents, can induce constipation in critically ill children also. In these cases, anticholinesterase drugs as neostigmine have been employed but only case series have been published in PICU population (79) with more studies in adults (62,78).

Some recent published studies have focused on prophylaxis protocols to treat constipation and the importance of bowel protocols for the management of constipation (61-63), but there is not a published paper so far in critically ill children.

Aside from pharmacological treatment, starting and intensifying hygiene and dietetic measures can help to improve constipation management, mainly in older children (16). Early mobilization and privacy are recommended but it is hard to achieve in some PICUs (1).

Dietary recommendations are focused on normal water and fiber intake (16-18), but critically ill children are under water and feeding restrictions in some cases. Different systematic reviews have showed a lack of effect or a mild improvement in stool frequency but without statistical differences or clinical relevance (81-84).

Evidence about the relationship between the intestinal microbiome and functional constipation is discordant (43,85-87). No clear evidence has been found with prebiotics, probiotics or symbiotics in healthy children with functional constipation (85,88-90) and they may not be recommended in critically ill children (91). No studies have been yet performed in critically ill children about this topic.

Constipation is a common but understudied disease in critically ill children that is related to higher morbidity. The lack of a standard definition makes it difficult to undertake studies to increase knowledge. The definition employed in critically ill adults (absence of stool for three or more consecutive days without mechanical obstruction) could be suitable for critically ill children as well. Diagnosis for constipation is exclusively clinical and most of the different available tests should be reserved for suspicion of specific diseases. First-line treatment are osmotic laxatives, mainly oral PEG and lactulose. New treatments for OIC are being developed and could be a future option as a second-line treatment but high-quality studies are required in this field. Prophylactic treatments should be studied too. Hygiene, dietetic measures and early mobilization can help to improve constipation management in older children. Developing protocols for constipation management in critically ill children should be compulsory in those PICUs where no protocols have been previously established.

This article has been reviewed by a native English speaker provided by Norgine for proper usage of English.

Provenance and Peer Review: This article was commissioned by the Guest Editors (Lyvonne Tume, Frederic Valla and Sascha Verbruggen) for the series “Nutrition in the Critically Ill Child” published in Pediatric Medicine. The article has undergone external peer review.

Conflicts of Interest: The authors have completed the ICMJE uniform disclosure form (available at http://dx.doi.org/10.21037/pm-20-63). The series “Nutrition in the Critically Ill Child” was commissioned by the editorial office without any funding or sponsorship. The authors have no other conflicts of interest to declare.