Hyperammonemic encephalopathy as a manifestation of Reye syndrome in a previously-healthy 14-year-old girl: a case report

Metabolic disorders are less commonly considered in the older child presenting with acute encephalopathy; however, organic acidemias, urea cycle and fatty oxidation disorders may present in adolescence. Reye syndrome may present in a similar manner, though there have been few published cases on this syndrome in the past several decades. Reye syndrome is characterized by acute encephalopathy and liver dysfunction. It is thought to be precipitated by viral pathogens, and there is an established association with aspirin consumption (1). Reye syndrome may mimic many inborn errors of metabolism (IEM) (2). IEM comprise a large spectrum of disorders caused by enzyme or cofactor abnormalities resulting in either accumulation of toxic products or deficiency of essential end-products (3). IEM may predispose to Reye syndrome (1). Severe IEM present neonatally, with most conditions diagnosed by early childhood; however, several diseases present during adolescence and are often misdiagnosed due to a lower index of suspicion (3).

We present the following article in accordance with the CARE reporting checklist (available at http://dx.doi.org/10.21037/pm-20-51).

A 14-year-old previously healthy girl presented to hospital with a 1-day history of sudden-onset aggressive behavioral changes and profoundly decreased level of consciousness. Further history revealed picky eating habits, with disordered eating for 3 weeks and a 2-day history of frequent vomiting. She was never febrile. The patient was developmentally normal, and born to non-consanguineous parents of Pakistani origin. Family history was non-contributory.

On presentation, the patient was tachycardic with bilateral extensor hypertonic posturing thought to be consistent with seizure activity, which resolved with intravenous lorazepam. She had an altered mental status with a Glasgow Coma Scale (GCS) of 8, and neurological examination was significant for bilateral brisk patellar reflexes, ankle clonus and positive Babinski sign. The remainder of her physical examination was unremarkable.

Ceftriaxone, vancomycin and acyclovir were initiated for presumed infectious encephalitis on admission. Given the strongly suspected metabolic etiology, dietetics and metabolics teams were involved early. Hemodialysis was initiated urgently upon confirmation of severe hyperammonemia, with a starting blood flow rate of 5 mL/kg/min and dialysate flow rate of 8.5 mL/kg/min.

During hemodialysis, the patient developed bradycardia, hypertension and a dilated right pupil, which was aggressively medically managed. Hemodialysis resumed, without any change in dialysis flow rate. The dilated pupil recurred, and subsequent CT scan confirmed cerebral edema with tonsillar and uncal herniation. These events were felt to be consistent with DDS. Intracranial pressure (ICP) monitoring was implemented, with initial pressures up to 35 mmHg. Her ICP was medically managed. External ophthalmoplegia developed, but subsequently improved.

Initial magnetic resonance (MR), including angiography and spectroscopy of the head, demonstrated only subtle thalamic changes on the diffusion-weighted image sequence. A subsequent MR on day 6 demonstrated increased diffusion restriction in the bilateral thalami, frontal lobes and insulae. This represented a significant deterioration in neuroimaging findings (Figure 2). MR on day 12 demonstrated abnormal subcortical white matter high signal on T2 and flair within the cerebral hemispheres. Electroencephalography (EEG) initially demonstrated severe diffuse encephalopathy, which improved over the next 2 weeks. 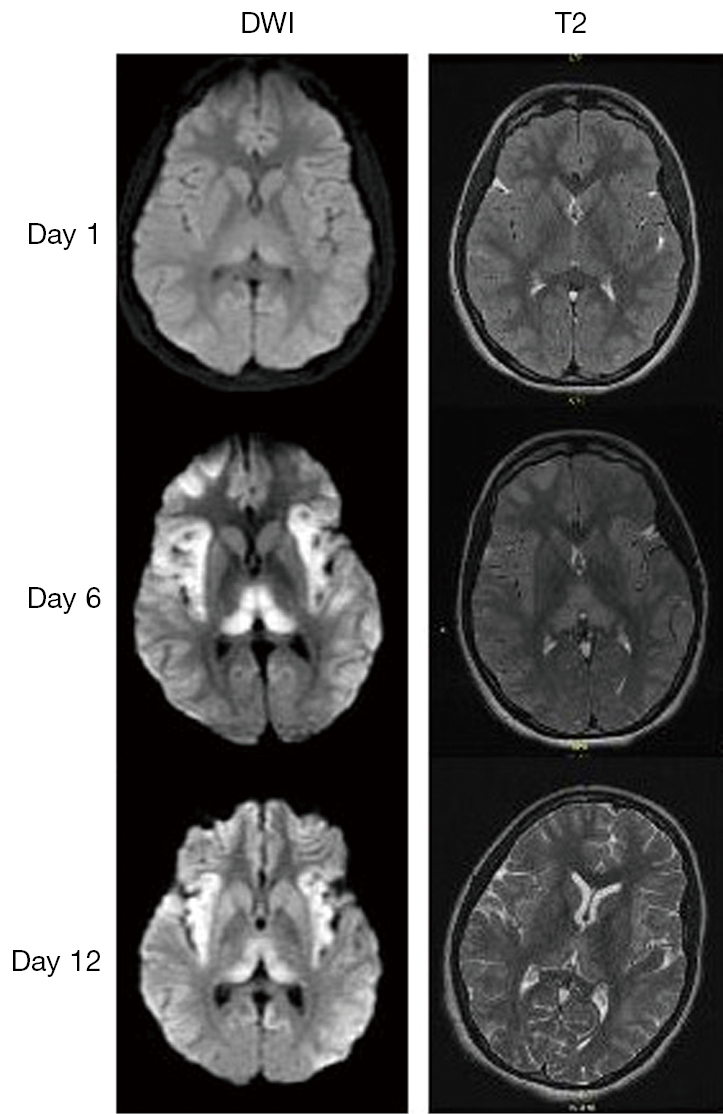 Protein was initially restricted, with diet normalization 4.5 weeks post-admission, with transfer to a pediatric neurological rehabilitation centre. The patient was instructed not to skip meals and to consume three snacks daily. An emergency protocol was provided. Treatment with citrulline and phenylbutyrate, which had been initiated with the finding of hyperammonemia, was discontinued after negative urea cycle disorder testing and ammonia level stabilization. The patient has significant behavioural issues and is 3–4 years cognitively delayed. Ammonia levels remain normal.

All procedures performed in studies involving human participants were in accordance with the ethical standards of the institutional and/or national research committee(s) and with the Helsinki Declaration (as revised in 2013). Written informed consent was obtained from the patient’s substitute decision maker.

An IEM featuring hyperammonemia and presenting in adolescence is most suspicious for a urea cycle defect, primarily OTC deficiency (4). While patients with complete urea cycle defects present neonatally, those with partial defects may present at older ages with intermittent symptomatic hyperammonemia (3). Compatible features in our patient include psychiatric symptoms, mental status change, encephalopathy, and chronic protein avoidance (3). However, metabolic acidosis is not typical of urea cycle disorders and is more common with organic acidemia or fatty acid oxidation disorders. Additionally, later ammonia levels remained normal without medical therapy, making this diagnosis unlikely.

The unremarkable metabolic and genetic investigations prompt consideration for Reye syndrome. Reye syndrome is classified by encephalopathy and hepatopathy defined by features on liver biopsy or three-fold or greater increase in either transaminases or in serum ammonia (1,5). Criteria for both encephalopathy and hyperammonemia were satisfied in our patient, and laboratory abnormalities were consistent with Reye syndrome, including increased liver enzymes, elevated INR, metabolic acidosis, decreased bicarbonate and normal cerebrospinal fluid (CSF) WBC (1). In this context, a liver biopsy was not performed. Low carnitine level is consistent with Reye syndrome, as is our patient’s preceding poor nutritional state (6). Treatment entails supportive care in an intensive care setting, with anticipatory management of hemodynamic and respiratory stability. Supportive management is indicated for increased ICP and edema, hyperammonemia, coagulopathy, metabolic acidosis and hypoglycemia. Beyond the provision of supportive care, no additional therapy is available. Incidence has declined significantly since warnings against aspirin use in children, from 10 to 1 per million children in the United States (2,7). Mortality rate is about 20%, with residual neurological deficits common in those with hyperammonemia (1).

Regardless of underlying etiology, hyperammonemia is a medical emergency. Severe elevations can result in neurological impairment, cerebral edema, and be acutely life-threatening. Initial management includes minimizing ongoing ammonia production by restricting protein intake and catabolism. Hydration with dextrose 10% solution is provided at (1–1.5)× maintenance rate and caloric intake optimized with provision of intravenous lipids at 1–2 g/kg/day. Enteral protein-restricted feeding should be introduced as soon as possible. Ammonia production can be further curtailed using nitrogen scavenger medications. IV L-arginine promotes nitrogen excretion and is also recommended. When the diagnosis is unclear, cofactors including L-carnitine and vitamin B12 should be initiated due to their possible benefit in treating organic acidemia; L-carnitine may also be useful in organic acidemia, fatty acid oxidation disorders and carnitine deficiency. Severe elevations in ammonia levels (>1,000 µmol/L) or failure to adequately respond to therapy as demonstrated by either persistently elevated ammonia levels (>400 µmol/L) or rapid rise in levels (to >300 µmol/L) despite therapy mandate treatment with hemodialysis or continuous hemodiafiltration (8,9); however, earlier treatment (at levels >150 µmol/L) should be considered in cases of deteriorating neurological status, moderate to severe encephalopathy, coma, and cerebral edema (8,9).

Excess ammonia reacts with glutamic acid to produce glutamine, leading to increased intracellular osmolarity and cytotoxic cerebral edema (4). Plasma glutamine concentration reached >3,800 µmol/L coincident with peak plasma ammonia levels. Balancing the urgent need to correct severe hyperammonemia with hemodialysis and the risk of DDS with rapid correction poses a clinical dilemma. DDS is a rare complication of hemodialysis classified by neurological deterioration with cerebral edema and increased ICP (10). Symptoms may include headache, confusion, restlessness and coma (10). Predisposing factors include first hemodialysis treatment, seizure disorder, preceding neurological disorder, severe uremia and younger age, and rate of urea removal plays a critical role (10,11). Elevated urea concentration at hemodialysis initiation is highly contributory; our patient’s normal serum urea level should have significantly lowered the risk for DDS (11). Treatment is supportive, aimed at controlling intracranial hypertension, though mortality rate is high (10). The main preventative mechanism is slowing the rate of urea clearance, running in direct opposition to the urgent need to correct hyperammonemia. The challenge of weighing our patient’s significant neurological deterioration within the first 24 hours of presentation, presumably related to advancing toxic changes from hyperammonemia, against the supposedly rare risk of DDS presented a therapeutic dilemma.

Overall prognosis of hyperammonemia is largely dependent upon underlying etiology and clinical characteristics such as duration and degree of hyperammonemia. Poor neurological outcome is correlated with ammonia level >400 µmol/L, age <1 month and coma lasting >72 hours (12). Outcome can be optimized by increasing provider awareness and immediate initiation of therapy (13).

This case report presents important observations on the clinical manifestations, diagnosis, treatment, and outcomes of Reye syndrome in a previously healthy adolescent. This is especially relevant given the sparse published literature on this syndrome in the last several decades, and serves as a reminder to pediatric practitioners to consider hyperammonemia and the potential of Reye syndrome when evaluating pediatric patients with acute encephalopathy. As well, this case report describes a rare complication of hemodialysis: DDS. DDS may occur with rapid clearance of ammonia and should be anticipated as a potential complication of aggressive management of hyperammonemia. Though this patient met diagnostic criteria for Reye syndrome, it is important to note that this is a diagnosis of exclusion, and that this patient had an atypical presentation without any history of exposure to aspirin. No standardized assessments were used to follow long-term developmental outcome for this patient.

The extremely time-sensitive nature of hyperammonemia management mandates that ammonia testing be part of the workup for unexplained encephalopathy at any age. Treatment focuses on minimizing ammonia production and optimizing clearance. DDS is a rare complication of intermittent hemodialysis but should be considered if increased ICP occurs in the context of rapid metabolic shifts. Reye syndrome must be considered when metabolic testing remains inconclusive.

We thank the patient and her family for allowing us to share their information.

Reporting Checklist: The authors have completed the CARE reporting checklist. Available at http://dx.doi.org/10.21037/pm-20-51

Conflicts of Interest: All authors have completed the ICMJE uniform disclosure form (available at http://dx.doi.org/10.21037/pm-20-51). The authors have no conflicts of interest to declare.

Ethical Statement: The authors are accountable for all aspects of the work in ensuring that questions related to the accuracy or integrity of any part of the work are appropriately investigated and resolved. All procedures performed in studies involving human participants were in accordance with the ethical standards of the institutional and/or national research committee(s) and with the Helsinki Declaration (as revised in 2013). Written informed consent was obtained from the patient’s substitute decision maker.