The effect of obesity on outcomes in burned pediatric patients

Rates of childhood overweight and obesity have reached epidemic proportions and are globally on the rise mostly in developing countries (1). The impact of obesity on all aspects of human health has especially drawn attention, and various studies have shown that this disease is a key and deep-rooted risk factor also in critically sick patients after major surgery and severe trauma (2-5). Burns are a considerable pediatric trauma burden worldwide (6), and due to the global epidemic of obesity the number of overweight patients presenting to burn centers is expected to increase over the next decades (7).

At present, it is debated if prevention and treatment of excessive weight gain should be a component of rehabilitation in pediatric burns. However, the influence of obesity in burned pediatric patients is controversial. On the one hand, it is in fact hypothesized that obese patients might benefit from the caloric reservoir during the catabolic state following burn injury (8). On the other hand, a predisposition to an impaired recovery might potentially jeopardize obese patients when rapid and unhindered recovery is actually vital for survival, as it happens upon trauma or severe burn injury (9).

Already in 1972, Wilmore et al. concluded in a study on 265 pediatric patients, treated in a US burn center, that obese patients are more susceptible to severe burns because they are deemed to be slower and have lower fine motor skills (10). Similar results were found by the same institution 20 years later, for a population of 372 pediatric patients (11). Hence, it is reasonable to think that the increasing prevalence of obesity and the associated metabolic complications pertain not only the general population, especially children and young adults, but also patients treated in burn centers (12).

As knowledge is currently lacking on the impact of obesity on postburn outcomes, especially in children, the aim of this review is to provide insights into the influence of obesity in pediatric burn patients, based on a systematic revision of available literature.

A revision of available literature was conducted to identify scientific studies, published from November 1972 to July 2019, related to the influence of obesity in pediatric burn patients. A database research was performed in digital format on Medline, PubMed and Scopus.

Title and abstract of each publication were first screened to select relevant studies. Full texts were then reviewed. Reference lists of selected papers were also reviewed to identify additional relevant studies. Studies on adult burn patients and studies not available in English were excluded from this review.

Screening allowed to select nine papers, related to influence of obesity in pediatric burn patients, out of a total number of 50 abstracts obtained from the initial search.

Morbid obesity and obesity were termed in accordance with official definitions. Morbid obesity is defined as an abnormal or excessive fat accumulation which may affect health (13). Obesity was defined as ≥95th percentile of weight for height, according to the World Health Organization growth charts for children <2 years of age. For children 2–18-year-old, obesity was determined by body mass index (BMI), calculated as weight in kilograms divided by height in meters squared, for age, according to the Centers for Disease Control growth charts (14).

The complete list of studies included in this review is reported in Table 1. 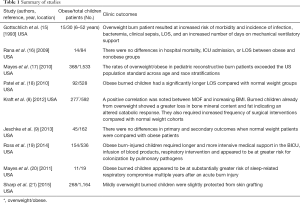 The results of the study by Gottschlich et al., performed on 30 burned patients aged 6 to 52 years (15 obese), highlighted obesity is associated to many metabolic and biochemical anomalies, distinct from the burn injury itself. They also suggest that overweight burned patients are at increased risk of morbidity and incidence of infection, bacteremia, clinical sepsis, longer hospital length of stay (LOS), as well as a higher number of days requiring mechanical ventilation (15). However, no difference in hospital mortality, intensive care unit (ICU) admission, or LOS between the obese and nonobese groups emerged when Rana et al. investigated the effect of obesity on pediatric trauma population within a study of 1,314 patients (6–20 years), of which 84 were burn children (16).

An American study compared the incidence of overweight (OW) status in reconstructive, pediatric burned patients, with the prevalence in the US population. The records of 1,533 pediatric patients, admitted for an elective reconstructive procedure 1 year after acute burn, were collected. The rates of OW and obesity (OB) in pediatric reconstructive burn patients exceeded the US population standard across age and race stratifications. The prevention and treatment of excessive weight gain should be thus a component of rehabilitation in pediatric burns (17).

The authors of a retrospective cohort review of children (528, included 17.4% obese), admitted to a pediatric burn unit, assessed the effect of obesity on LOS, and compared the characteristics of obese and nonobese burn patients. They found that obese children have a significantly longer LOS with respect to normal weight cohorts, and this finding may be attributed to impaired healing, complication rates, or greater functional impairment (18).

A number of 592 children with burns in more than 30% of their body surface area were studied in order to identify organ system and clinical challenges came upon children sustaining burn injuries.

A positive correlation was observed between multisystem organ failure (MOF) and increasing BMI. Clinically important overweight patients showed a greater loss in bone mineral content and fat, which indicates an altered catabolic response. These results show that changes in hormonal and metabolic functions occur already in patients with a BMI below the 90th percentile. In addition, it was found that overweight, obese, and morbidly obese children required increased frequency of surgical interventions, with respect to normal weight cohorts (8).

Jeschke et al. performed a study on 405 burn patients stratified into two groups: 170 pediatric burn children (<18 years of age) and 235 adult patients (≥18 years of age). It was found among children, that clinical secondary outcomes, such as ICU admissions, readmissions and length stay did not differ significantly between the pediatric normal weight group and the obese one. In addition, the number of burns wound and nosocomial infections, as well as the types of infection themselves were comparable in pediatric normal weight and obese patients. Hospital morbidity and events were also not significantly different between the two groups. The primary outcome, that is, mortality, was not significantly different between the normal weight and obese pediatric patients (9).

Data analysis on patients ≤18 years of age (n=536 with 154 obese children) demonstrated that obese burn-injured children required longer and more intensive medical support in the burn unit, as well as longer infusion of blood products and respiratory intervention. In line with the bigger requirement for intensive hospital management, obese pediatric patients appeared to run a higher risk of colonization by pulmonary pathogens (19).

A high prevalence of obesity in burned children during the rehabilitative phase has recently emerged in recent reports. The relationship between sleep apnea and obesity in children recovering from burn injury was investigated by a retrospective review. Nineteen subjects were examined for polysomnographic (PSG) and respiratory outcomes. A total number of eleven patients were classified as obese and eight as nonobese. Both groups were similar in age, percent total body surface area (TBSA), full-thickness burns, and incidence of injury to the neck region. Moreover, the two groups were approximately 8 years postburn at the time of PSG testing. In this study, the obese group showed a BMI ≥90th percentile, according to age and gender specifications, as defined by the Centers for Disease Control and Prevention. They were also at substantially greater risk of sleep-related respiratory compromise, several years after an acute burn injury, in comparison with their normal weight counterparts (20).

A retrospective chart review was performed on 1,164 children who underwent burn treatment from January 1995 to November 2011. The primary outcome measure was the need for skin grafting. Data showed that underweight pediatric burn victims are at increased risk for skin grafting, while mildly overweight children are slightly protected from skin grafting (21).

In summary, the paper is one of the first studies providing a comprehensive overview of the relationship between obesity and burn injury-related outcomes in the pediatric population. Most studies included in the systematic analysis showed that obesity does affect the outcome of pediatric burn patients, and is associated with MOF, an increased LOS and a greater loss in bone mineral content and fat. This indicates an altered catabolic response. In addition, there exist a longer and more intensive request for medical support in the burn intensive care unit, for infusion of blood products and respiratory intervention, as well as a greater risk of sleep-related respiratory compromise several years after an acute burn injury. Mildly overweight children are slightly protected from skin grafting.

It also emerged that very few studies are still available on how the ponderal status of children can affect their recovery from acute burn injury. Additional research is thus required to outline more clearly what impact pediatric obesity can have on burn injury, as well as to improve the treatment which may allow minimizing the gap between outcomes of obese children and normal weight population.