Features and management of asynchronies in children

Partially-assisted MV is the preferred mode to wean critically ill patients (4). This strategy, partitioning the ventilation between the patient and ventilator, can reduce the occurrence of VIDD by maintaining the contractile activity of the respiratory muscles (5). However, a correct optimization of the patient-ventilator interactions is mandatory to avoid both VILI and VIDD (6). Asynchrony is characterized by a mismatch between the patient and ventilator in terms of breath delivery timing. Asynchronies can be caused by several factors affecting both the patient and the ventilator (e.g., the level of sedation, the patient’s respiratory drive, the disease state and the ventilator settings) (7). The detection of asynchronies requires at least a careful clinical examination of the patients’ respiratory pattern as well as of the airway pressure (Paw) and of the flow waveforms recorded on the ventilator monitor (8). However, there are several limitations which could reduce the proper detection of asynchronies: first, asynchronies can happen anytime and it is not possible, with the current technology, to detect them continuously; second, physicians require a specific training to detect them; third, some types of asynchronies, such as auto-triggering, cannot easily be recognized by the examination of the pressure, flow, or volume waveforms.

The esophageal manometry, mainly used in the adult critical care unit to measure the esophageal pressure as a surrogate of the pleural pressure, may provide the most accurate assessment of the patient-ventilator interactions in combination with the flow, pressure and volume waveforms (9,10). However, this technique is not routinely used in the adult critical care for this scope and it is still limited for the pediatric patients (11).

If asynchronies are not properly managed, they can cause an increase the risk of VILI, VIDD, and consequently the need to increase sedation. This could impact the duration of MV and of all its complications (12).

In this review, we will classify and define the different types of asynchronies and their potential management.

Asynchronies are usually classified according to the phase of the respiratory cycle in which they occur: the trigger phase, the inspiration, during cycling off and the expiration phase (7). The use of this classification supports an easier diagnosis using the available waveforms (9).

However, in order to start a treatment strategy, an approach based also on the condition causing asynchronies is useful.

The respiratory drive during MV is complicated and involves feedback signals from central and peripheral chemoreceptors such as mechanoreceptors and vagal inputs from the lung, the chest wall, and the respiratory muscles (13). Respiratory centers can be also influenced by other stimuli such as anxiety and pain.

An ineffective trigger is however defined, both in children and in adults, as a sudden airway pressure drop (0.5 cmH2O) coinciding with a flow reduction, not followed by an assisted cycle during the expiratory period (16) (Figure 1). Delayed cycling occurs when the mechanical inspiratory breath continues after the end of the neural inspiration (Figure 2). 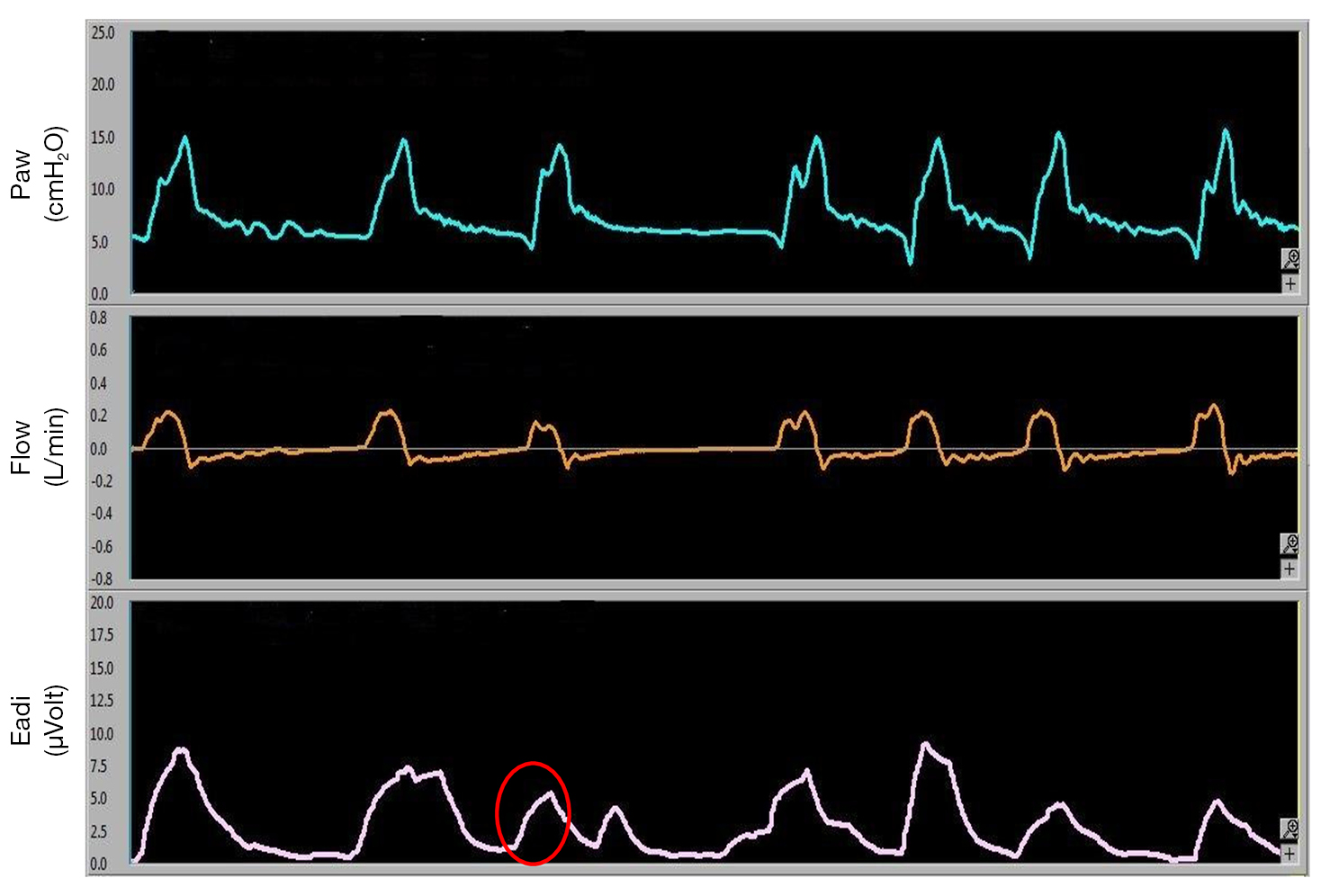 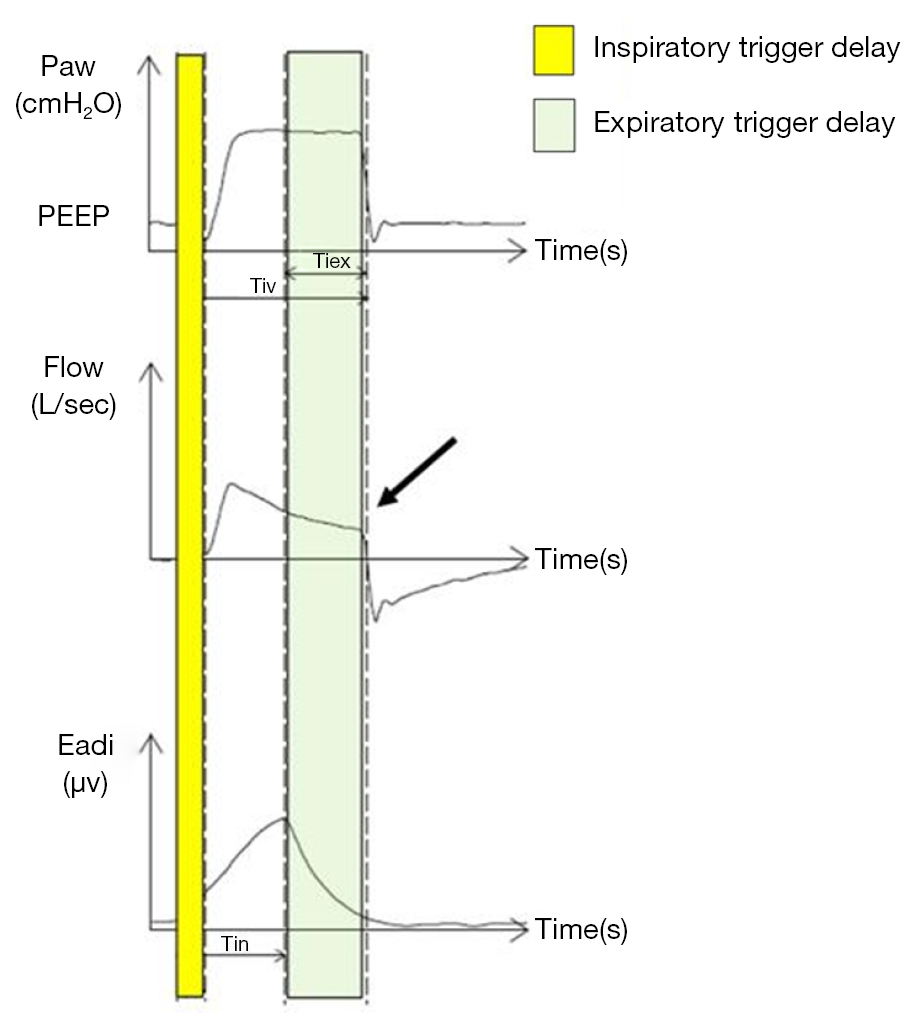 Both in adults and children, ineffective efforts are the most frequent types of asynchronies (16-20). The most frequent cause of trigger delay and ineffective efforts is the dynamic hyperinflation which is very common in pediatric obstructive pulmonary diseases (e.g., bronchiolitis, bronchodysplasia, etc.). Dynamic hyperinflation develops the “intrinsic positive end-expiratory pressure” (PEEPi), that represents an increase in the elastic load of the lungs that the patient must overcome in order to trigger the ventilator. The presence of PEEPi is determined by the presence at end expiration of a lung volume greater than the volume of air present at functional residual capacity (19-21).

Excessive trigger delay and ineffective efforts (22-25) can be corrected by implementing strategies able to reduce the dynamic hyperinflation (e.g., tidal volume reduction, reduction of the respiratory rate and of the expiratory time, and the use of an external PEEP able to counterbalance the PEEPi).

The second most common type of ineffective effort is the autotriggering, that is considered in case of breaths delivered by the ventilator without an inspiratory effort (Figure 3). 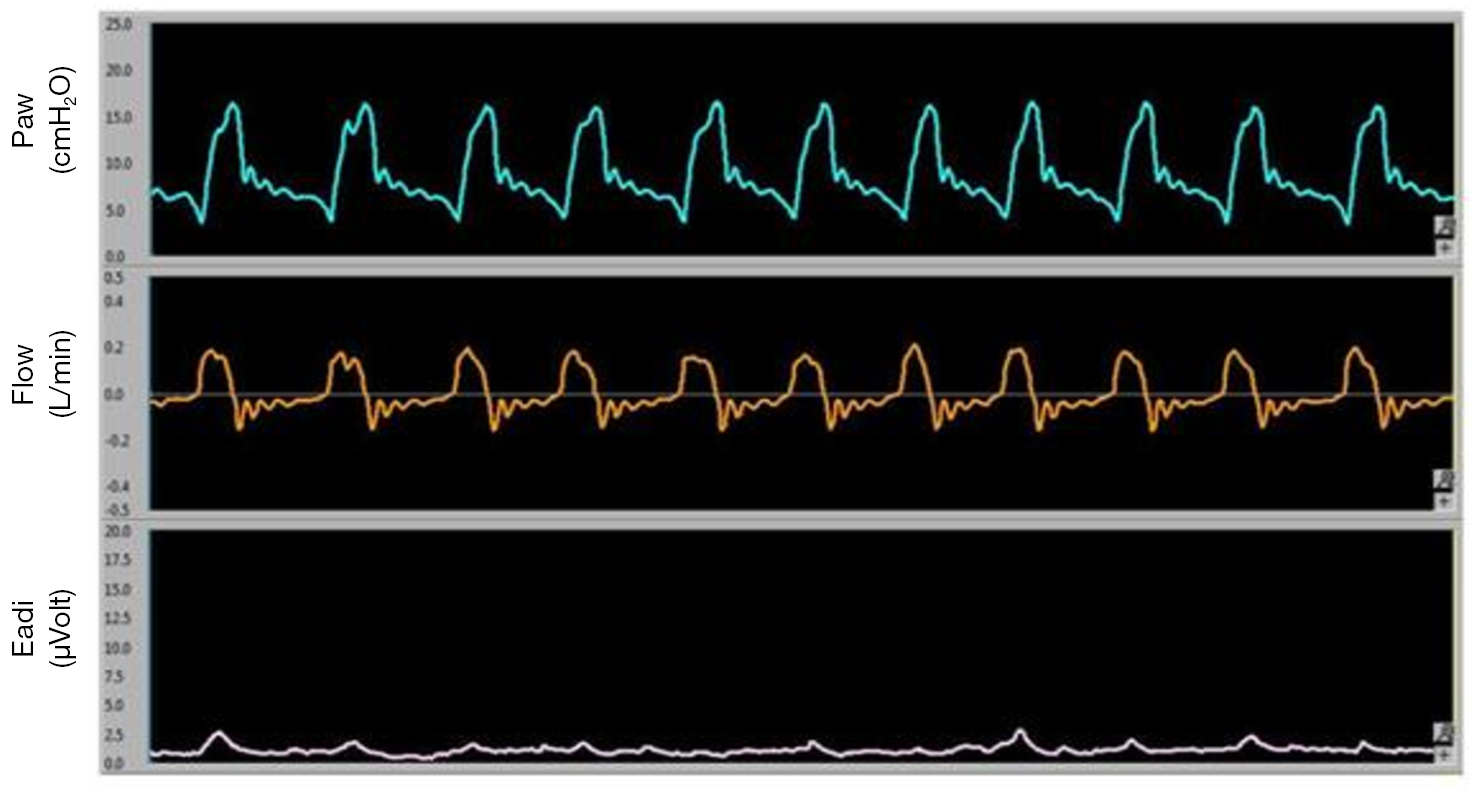 Figure 3 Example of autotriggering in PSV with electrical activity of diaphragm monitoring. Each act released by the ventilator is not followed by patient’s efforts. PSV, pressure support ventilation.

Autotriggering is characterised by an increase in volume, flow and pressure without any signs of the patient’s effort (negative deflection of the pressure waveform) (8). Mechanical causes responsible for the autotrigger are: the presence of water in the ventilator’s circuit, the presence of air leaks and the use of a low inspiratory trigger threshold. There are also patient-related causes such as a low respiratory drive or a reduced respiratory rate. In these conditions, in fact, the expiratory flow remains at zero for a long time favoring the triggering by factors other than the patient's effort. The electrical activity of the diaphragm (EAdi) can help to detect this asynchrony. Autotrigger is generally in association with a low respiratory rate and a low EAdi (<5 microVolt) (13,14). This asynchrony can be reduced by increasing the pressure or the flow threshold to trigger the ventilator, by reducing the air leaks in the circuit or by increasing the patient's respiratory drive (e.g., reducing the level of sedation, or correcting the causes of respiratory alkalosis).

Akoumianaki et al. (26) first described the occurrence of reverse triggering in adults undergoing MV. The peculiar feature of this asynchrony is that the breath is triggered by the ventilator (not by patient). Heavy sedation suppresses the respiratory drive and seems to be associated with this asynchrony.

Blokpoel et al. (27) were the first to report a reverse triggering in an11-month old infant undergoing passive MV for respiratory failure. However, more studies are needed to understand the physiologic mechanisms and the clinical impact of this asynchrony in both adult and pediatric population. 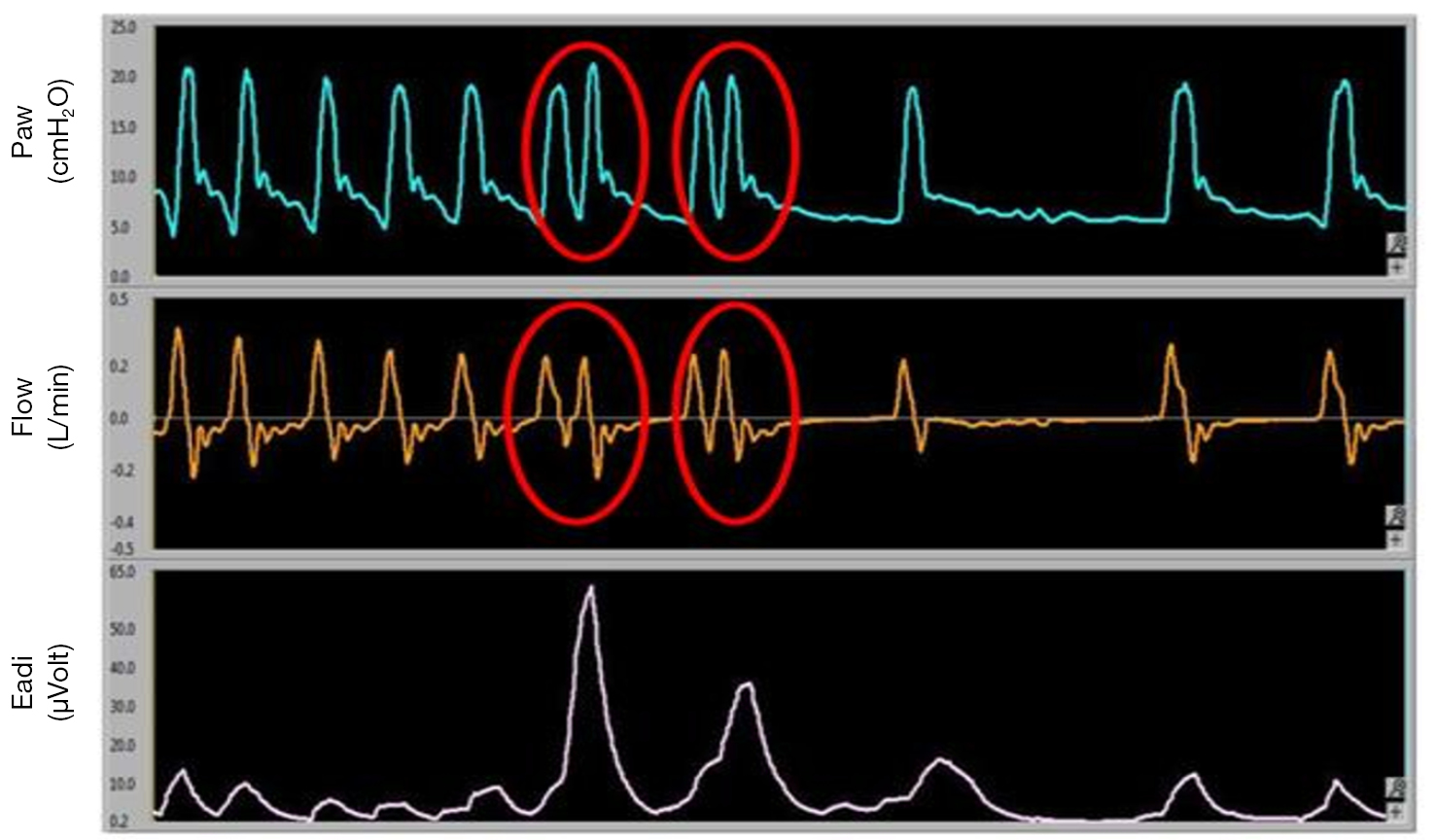 This asynchrony is easily identifiable, since the asynchronous breath is shorter than the breath that precedes it; the final lung volume can significantly increase contributing to VILI (30).

It could be questioned whether the modern ICU ventilators are able to properly detect the inspiratory efforts in small children since their high respiratory drive.

Marchese et al. (31) tried to address this question comparing the performances of both adult and neonatal intensive care ventilator ventilators. They showed that the presence of air leaks did not affected the trigger sensitivity. In contrast, Vignaux et al. (32) demonstrated a decrease of the ventilator performances when the air leaks were introduced.

The “ideal” pediatric trigger, should have a rapid response time to cope with the short inspiratory times and the high respiratory rates and should be very sensitive to be activated by modest efforts. On the same time, it should avoid: auto-triggering, dead space effect and must compensate for air leaks. Synchronization of the MV time with the neural time is very complex especially in neonates since their short inspiratory times. Low tidal volumes, high respiratory rates, periodic breathing patterns and air leaks also contribute to the mismatch between the neural inspiratory time and the mechanical inspiratory time (32-34). These factors are challenging especially with the breath triggering, cycling-off and the breath termination.

Partial support modes allow to the contraction of the diaphragm and could contribute to reduce the occurrence of VIDD (35,36).

The aim of assisted-spontaneous breathing is to provide assisted-breaths that are synchronous to the patient’s efforts and proportionate to the patient’s requests (37,38). The actual neonatal ventilators have generally two modes of ventilation: assist-control/pressure-control ventilation (ACV/PCV) and pressure-support ventilation (PSV). The initiation of the breath can be triggered by the patient’s respiratory effort in both modes; cycling instead is controlled either by time (for PCV) or flow (for PSV), while the support level is fixed by the physician.

During NAVA, the triggering is associated to the EAdi signal. The EAdi is a diaphragmatic electromyography recorded through an array of electrode pairs mounted on a nasogastric feeding tube (14). The EAdi is proportional to the intensity of the electrical neural stimuli to the diaphragm, i.e., to the neuro-ventilatory drive (15). When using NAVA, clinicians must set on the ventilator: (I) the FiO2; (II) the positive end expiratory pressure (PEEP); and (III) the assist level (or NAVA level), which determines the proportionality between the EAdi and the ventilator pressure in cmH2O. Cycling from inspiration to expiration occurs when the EAdi signal reaches 70% of the peak of the EAdi.

In PAV the delivered breath instead increases proportionally to the instantaneous tidal volume and inspiratory airflow generated by the patient. During PAV, the muscular effort is calculated noninvasively by the ventilator, using respiratory system elastance, flow, Paw, and resistance. Thus, the ventilator can calculate the pressure needed to support the patient accordingly to the flow and volume requested, based on the set PAV percentage. Additionally, as the patient’s lung mechanics change, those ventilators that automatically measure elastance and resistance, can adjust the amount of pressure needed to maintain the set PAV percentage. PAV is able to improve patient-ventilator interactions during the onset of inspiration, by matching the patient’s inspiratory demand. Differently in PSV, the flow decelerates when the pressure meets the targeted level.

Musante et al. (42) also showed that PAV was able to decrease the thoraco-abdominal asynchronies and chest-wall distortion compared to continuous positive pressure airways ventilation (CPAP) in 10 preterm infants. This was permitted by an increase of 3.8–7.6 cmH2O above the CPAP level. Despite these positive studies, PAV is currently not recommended for patients less than 20 kg.

NAVA technology uses a special nasogastric tube with a series of electrodes near its distal end. The catheter must be positioned across the diaphragm to detect the electrical activity of the diaphragm during the contraction. Its use improves the patient-ventilator interactions in both adult and children (43). Similar to PAV, the ventilatory effort is proportionally shared between the ventilator and the patient. Contrary to PAV, NAVA greatly improves the inspiratory trigger, since ventilator delivers the breath when the diaphragm is “electrically” stimulated. The EAdi monitoring in neonatal and pediatric patients seemed to improve the detection of patient-ventilator asynchronies in patients ventilated not only in NAVA, but also in other ventilatory modes (44-48). Beck et al. (47) reported improved patient-ventilator interactions in 7 low-birth-weight neonates even in presence of large air leaks. Neonates on conventional ventilation had a similar mechanical and neural inspiratory time while the cycling off in conventional ventilation was 120 milliseconds earlier than in NAVA. They also found the neural expiratory times and respiratory rates were shorter during NAVA. Bengtsson et al. (48) found improved patient-ventilator interactions during a 4-hour trial in NAVA compared with PSV in 16 children. They also found a reduction of 28% of the peak airway pressure at the beginning of NAVA and a reduction of the 32% of the peak airway pressure after 3 hours of NAVA. Mean airway pressure, minute ventilation, expired tidal volume, respiratory rate, heart rate, PaO2 and PaCO2 did not change. This study did not show any patients or device-adverse events. Bordessoule et al. (49) evaluated 10 infants in NAVA, pressure control ventilation (PCV) and PSV. In PCV and PSV, 4% and 6.5%, respectively, of the neural efforts did not trigger the ventilator. In NAVA, instead, all the inspiratory efforts were triggered. Trigger inspiratory delay was higher in PCV (193 milliseconds) and PSV (135 milliseconds) than in NAVA (93 milliseconds) and the ventilator cycled off before the end of neural inspiration both in PCV and PSC (in 12% and in 21% of the breaths respectively).

Asynchronies are frequent events during MV. Different types of asynchronies arise from different physiologic causes, thus management changes accordingly. Our knowledge about pediatric asynchronies derives from small and limited observational studies, therefore precise epidemiologic data are needed. Future pediatric studies should evaluate the real benefit of a continuous monitoring of asynchronies at bedside (esophageal catheter or EAdi) to increase their detection and evaluate if this approach can impact the final outcome (reduction of MVs free days and survival).