Posterior urethral valve (PUV) is the most common cause of lower urinary tract obstruction (LUTO) in boys (1). PUV can cause congenital obstructive uropathy related to end-stage renal diseases (ESRD) followed by complications of bladder outlet obstruction and kidney dysplasia (2). With an incidence of approximately 1/3,800–1/10,000 in male infants, the PUV, as a valve-type obstruction to the urine outflow, affects the urinary bladder function and the upper urinary tracts (3,4).

A few cases of LUTOs can present as collecting system rupture followed by the high pressure of collecting system because of the obstruction of the bladder outlet. Some case reports have described the phenomenon, including urine ascites (UA) and retroperitoneal urinoma in neonates (5,6). However, the treatment and outcome of PUVs with collecting system rupture are still unclear. In this research, we retrospectively investigated the cases treated in our center, to find the outcome of this subset of patients, and to compare the first choice in such patients.

In this study, we firstly reported our clinical experience with regard to the treatment of infants diagnosed with PUV combined with urinary extravasation. It’s the largest number of cases reported according to the literature. We have described the good outcomes during current follow-up in these cases. The initial surgery choice in such patients was discussed.

A total of 10 patients from 2010 to 2018 met the inclusion criteria. Clinical data was collected on demographics, diagnosis, surgeries, clinical symptoms, renal function, radiology manifestations, and follow-up information. Glomerular filtration rate (GFR) was calculated by 99Tc-DTPA renal dynamic scan. The GFR of the affected kidney, total GFR, and serum creatinine (SCr) were compared before and after surgeries.

The values of age, SCr, and GFR were described as mean ± SD. Comparisons were performed using the Student’s t-test with an α level of 0.05, using STATA14 software (StataCorp, TX, USA).

This study was approved by the Institutional Review Board of Children’s Hospital, Fudan University (No.2018-282). The study was performed in compliance with the Declaration of Helsinki, and other relevant regulations. Informed consent was obtained from all individual participants included in the study.

Ten male infants diagnosed with PUV and collecting system rupture were enrolled. The average admission age was 97.2±143.8 days (range, 7 days to 15.5 months), but 8 of them (80%) were under 3 months. There were 6 cases with perinephric urinoma, 2 cases with urinary ascites, and 2 cases with both retroperitoneal urinoma and urinary ascites. The manifestation of them were abdominal distension, dysuresia, urinary tract infection with fever or prenatal diagnosed. All patients were diagnosed by ultrasound, magnetic resonance urography, and the GFR was evaluated by nuclear medicine at a minimum age of 1 month. The UA was tested with a result of elevated creatinine to confirm the leakage of urine. The PUVs were diagnosed using a voiding cystourethrogram (VCUG) and cystoscopy. None of the patients have pulmonary dysplasia or antenatal oligoamnios.

Catheterization was the first procedure in all cases. Subsequently, the patients underwent one or more surgeries of urinoma drainage, valve ablation, vesicostomy, and ureter stent retention. In the first 4 cases, perinephric drainage or UA drainage was performed as the first surgery with second stage valve ablation or vesicostomy. The drainage tube of urinoma or UA was removed after recover of the urine leakage, and the retention interval of the tube last for 7–18 days in these cases. In the other 6 cases, primary valve ablation or vesicostomy without drainage of the leaking urine was the first surgery. All urinary leakage recovered well without postoperative complications.

Urinary infections were common. All patients suffered from urinary tract infections at one or more times before their last surgical therapy.

Six of them had vesicoureteral reflux (VUR) in 10 moieties, which still existed during repeat VCUG after valve ablation. Repeat VCUG showed the trend of recovery of VUR. Nine patients were followed up without urinary tract infection in the last visit, while the 10th patient was kept under observation for a short postoperative period after valve ablation. Continuous prophylactic antibiotics were administered to 3 of the 9 patients. No ureter reimplantation was performed in any patient.

No patients went into ESRD during observation. Initial and follow-up values of renal function, including SCr, and nuclear renal dynamic scan showed the recovery of renal function. At the last follow-up, the mean SCr level was 30.1±6.0 µmol/L (range, 20–37 µmol/L) compared to the initial SCr of 105.8±141.1 µmol/L (range, 16–390 µmol/L) (P=0.107). During the follow-up, the mean total GFR increased from an initial level of 49.95±15.96 mL/min to 70.49±14.83 mL/min (P=0.008).The GFR of the collecting system of the affected kidney and total GFR were raised in 18 kidneys, but no changes happened in 2 kidneys without function because of prenatal dysplasia in 2 patients.

The patient’s age, location of urine leakage, initial SCr, VUR, the surgeries or procedures performed, the follow-up of SCr and VUR are listed in Table 1.

The trends of SCr and GFR during follow-up are described in Figure 1. 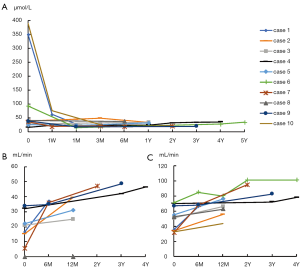 In the past decades, PUV had a bad prognosis in boys. About 10–30% of the patients would progress to end-stage renal failure by their adolescent years according to previous studies. The risk factors of chronic renal failure are widely discussed by many research studies (7). However, some sub set groups of patients with PUV can archive better prognosis. For example, infants with VUR can speculate a good function of contralateral kidney to make good total renal function. According to the data during short-term follow up in our study, all patients survived with good renal function. No chronic kidney disease occurred in this case series.

Hochart et al. reported a good outcome of urinoma in PUV cases diagnosed using ultrasound such that none of the children with perirenal urinoma had renal failure (8). The rupture, which as a kind of drainage of the collecting system, may occur prenatally, and it protects the kidney from high pressure which can be hazardous to the kidney development. A similar study also reported a case series of PUV with chronic kidney disease but presence of pre- or postoperative VUR was not associated with poor outcomes (9). According to the consensus that the initial and nadir SCr predict the prognosis (10), the patient achieves good outcomes when SCr is managed effectively. In this study, the patients’ SCr levels recovered despite being highly elevated at first admission.

Split GFR can by calculated by nuclear medicine to represent the split kidney function. In our study, the total GFR recovered in both kidneys, including the affected one. In the patients with unilateral kidney rupture, the repeat test of GFR by renal dynamic scan was shown to be elevated in all cases but one with original kidney agenesis and no function. This suggested that the collecting system rupture had a protective effect not only in both kidneys but also in the affected one. In contrast, a natural increase in GFR occurs along with the growth of children before 2 years of age (11). This phenomenon may lead to the bias of considering GFR to determine the recovery of kidney function during following up. Further follow-up and long-term observation may provide more evidence on urine extravasation as a low risk factor of future kidney injuries in patients with PUV.

Mostly, a good drainage of the bladder with either catherization or vesicostomy provided good decompression of the collecting system. In our continuous case series, the results showed the nadir SCr and total GFR in both the drainage (first 4 cases) and the non-drainage group (later 6 cases). This implies that a drainage of UA or retroperitoneal urinoma may be unnecessary. However, urine drainage in patients with a huge mass in the abdomen can result in good initial recovery of normal breathing and symptom remission. When a patient can tolerate anesthesia and valve ablation, the removal of urethral obstructions is the most effective procedure. Then, the urine leakage of collecting system can restore itself.

The limitation of our study is the small number of cases without control groups due to the low mortality of this diagnosis. In the future, a multicenter experience will be more useful in predicting the outcomes of different procedures. Moreover, long-term follows-up can be made in the future to determine the long-term outcome in this population of patients.

We thank the staffs from Urology Department of Children’s Hospital, Fudan University for their excellent work on clinical cases.

Conflict of Interest: The authors have no conflict of interest to declare.

Ethical Statement: The authors are accountable for all aspects of the work in ensuring that questions related to the accuracy or integrity of any part of the work are appropriately investigated and resolved. This study was approved by the Institutional Review Board of Children’s Hospital, Fudan University (No.2018-282)