The increased survival of preterm infants has been truly remarkable, as witnessed by neonatologists of my generation. Longer-term morbidities have also improved, although possibly not quite at the same rate. When considering various morbidities in the extremely low birthweight population, the respiratory and central nervous systems (CNS) rank very highly. We desperately need to provide answers for the persistent lung and brain problems that a proportion of surviving preterm infants manifest. This review is designed to explore an unanswered question: does immature respiratory control with its resultant intermittent hypoxic (IH) episodes have short and/or longer lasting adverse consequences (Figure 1)? 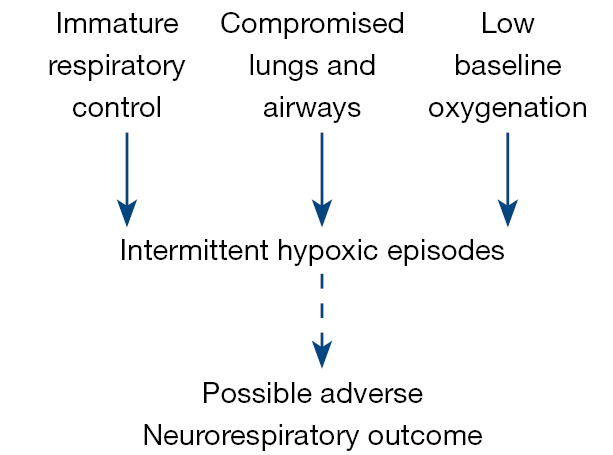 The problem of apnea of prematurity has been increasingly recognized since the late 1960s when current respiratory management of these infants took giant leaps forward. It was during this period approximately 50 years ago that widespread apnea monitoring became feasible (1). There followed a series of studies which documented a clear inverse relationship between gestational age and apnea incidence (2). Physiologic studies in preterm infants simultaneously documented immaturity of respiratory control in preterm infants. This was manifest as decreased CO2 sensitivity, failure of a sustained ventilatory response to hypoxia and the presence of potent respiratory inhibition from upper airway stimulation (3). Such observations provided useful information on the important biologic links between two key organs: the lungs and the brain. Meanwhile, over ensuing decades the limits of viable gestation progressively decreased and so apnea became more of a clinical problem, frequently prolonging the hospitalization of these infants.

The scope of monitoring also increased over this period to include heart rate as well as oxygenation. Heart rate monitoring invariably accompanied respiratory impedance methods and identified bradycardia as a frequent accompaniment of apnea, assumed to be a vagally mediated reflex response, possibly also triggered by hypoxia. A major advance over the last 40 years saw the widespread acceptance of non-invasive oxygen monitoring, first via transcutaneous PO2 and more recently via oxygen saturation. The result is a triad of respiratory, heart rate and oxygen saturation monitoring that raised many questions as to whether apnea, bradycardia and/or desaturation have consequences for preterm infants.

Although immature respiratory control and resultant apnea or hypoventilation are the primary problems, the resultant triad of apnea, bradycardia and desaturation is frequently referred to as a “cardiorespiratory event”. They frequently delay the discharge of preterm infants. Management surrounding discharge decisions for infants with apnea of prematurity vary widely, but most physicians require infants to be apnea/bradycardia free for a period of time before discharge, approximately 5 days (4). It follows that infants with persistent apnea have prolonged hospital stays. It should be noted that while discharge considerations are usually based on nursing observation and recording of apnea or bradycardia events, this may not always correlate with those events that are electronically recorded.

We have documented that infants referred for apnea monitoring studies because of persistent bedside monitor alarms have very infrequent prolonged apnea, but a higher frequency of desaturation and bradycardia in response to short respiratory pauses than infants without persistent bedside monitor alarms (5). Referral infants also exhibit a lower baseline SaO2. These abnormalities in oxygenation and cardiorespiratory control may be markers for subtle residual lung disease or CNS abnormalities as discussed later. However, brief isolated bradycardic episodes that spontaneously resolve and feeding-related events that resolve with interruption of feeding are common in convalescent preterm infants and generally need not delay discharge. Consistent with this recommendation, cerebral oxygenation, as measured non-invasively by near-infrared spectroscopy, was not adversely affected by isolated modest bradycardias in the absence of desaturation (6). Finally, there is no evidence that persistence of cardiorespiratory events predicts the recurrence of clinically significant events on discharge, or the need for re-admission to the hospital.

Despite increasingly improved outcomes in Neonatology, the incidence of BPD remains extremely high, approaching 40% of all extremely low birth weight (ELBW) infants <1.0 kg at birth. This is despite efforts to limit excessive exposure to supplemental oxygen and the widespread acceptance of non-invasive ventilatory techniques that avoid endotracheal intubation (7). This raises the question whether immature respiratory control (superimposed upon an immature lung) is a major contributor to BPD (8). To explore this further, desaturation (or IH) episodes have been employed as a technically feasible and quantifiable measure using continuous recording of oxygen saturation via pulse oximetry.

We have recently documented that BPD was associated with more frequent, longer, and less severe IH events in addition to increased oxygen and pressure exposure within the first 26 days of life. We speculate that early IH patterns may contribute to the development of BPD or aid in identification of neonates at high risk (9). Even though the IH events preceded the diagnosis of BPD, this still does not prove a causal relationship. For example, the IH events may be confounders in that it is the treatment of these events (e.g., ventilatory support) that is causal in the relationship between IH and BPD. Another recent study has demonstrated similar findings. Fairchild documented an association between oxygen desaturations in the first month of the neonatal intensive care unit (NICU) course and risk of BPD (10). Their data suggested that IH events were not just confounders, but contributed to the development of BPD beyond the expected contribution from ventilatory parameters. As noted earlier, measures of bradycardia did not significantly add to the predictive model. While level and duration of respiratory therapy have been well described in the injury pathways of BPD, temporal patterns of IH may play a role as an additional early marker for future diagnosis of BPD. The etiology of this proposed relationship may include pro-oxidant and related proinflammatory pathways that IH and re-oxygenation recovery are likely to provoke with adverse effects on lung injury. This remains an area for future study.

Increased airway reactivity is the most prominent clinical respiratory complication of preterm birth. This occurs in preterm survivors with and without BPD, and is manifest at school age and beyond despite the increased use of non-invasive neonatal ventilation such as continuous positive airway pressure (CPAP) (11). We have documented an association between early inspired oxygen use and IH events and asthma medication use at 2 years of age in a single center cohort of extremely preterm infants (12). To gain better understanding of potential underlying mechanisms, we have employed neonatal mice and exposed them to IH in order to measure subsequent airway reactivity (13). We observed that IH was only associated with later airway hyperreactivity if followed by a rebound hyperoxic overshoot. Such hyperoxic overshoot in response to apnea and desaturation is common in preterm infants (14). These findings, again, point to oxidant stress and a role for oxidant/antioxidant pathways in the pathogenesis of the adverse effects of immature respiratory control and resultant desaturation episodes.

Sleep disordered breathing is approximately 3 times more common in very preterm vs. term infants at school age (15,16). The largely obstructive apnea these children manifest may have multiple etiologies, both anatomic and/or functional. Neonatal rodents exposed to IH have demonstrated abnormal respiratory control and ventilatory instability at maturity (17). It is, therefore, conceivable that IH-induced alterations in chemoreceptor function may have long-lasting effects and contribute to altered coordination of various respiratory muscle groups in later life.

The immature retina can be considered an extension of the developing CNS and perturbations of retinal vascular development can be triggered by several factors, including oxygenation level. These disturbances of vascular development begin with a phase of delayed retinal vascular growth and/or vascular regression (18). During this first phase, hyperoxia suppresses vascular endothelial growth factor (VEGF), resulting in inhibited normal vascularization. The second phase of retinopathy of prematurity (ROP) consists of vascular over-proliferation initiated by hypoxia-induced elevated levels of VEGF and other growth factors, which in turn results in pathological retinal neovascularization. Thus, both hyperoxia and hypoxia may play roles in the development of ROP. About one decade ago we explored whether the common IH episodes exhibited by preterm infants are associated with development of ROP. Di Fiore et al. (19) demonstrated an increase in the frequency of hypoxemic episodes during the first 8 weeks of life in preterm infants, with a higher incidence of hypoxemic events associated with severe ROP requiring laser therapy. Subsequent analysis of these data demonstrated a strong relationship between IH events and severe ROP when there was a time interval of at least one minute between events, a possible requisite for oxidative stress to develop (20). At least two subsequent studies have confirmed this relationship between IH events and ROP (10,21). This raises the question whether baseline oxygen saturation targets should be slightly raised in ELBW infants after several postnatal weeks when IH events are most prominent and they have the potential to enhance retinal vascular proliferation.

Prior studies have attempted to correlate the incidence of apnea of prematurity with later neurodevelopmental outcome. The problem of correlating apnea with outcome is enhanced by the fact that nursing reports of apnea severity may be unreliable, and impedance monitoring techniques will fail to identify mixed and obstructive events. Nonetheless, an association has been shown between the number of days of apnea plus the number of days of assisted ventilation, and impaired neurodevelopmental outcome (22). Similarly, a relationship has also been shown between delay in resolution of apnea and bradycardia beyond 36 weeks’ corrected age and a higher incidence of unfavorable neurodevelopmental outcome (23). Measures of desaturation have also added to a predictive model for intraventricular hemorrhage (10).

More recently the focus has changed from attempting to quantify apnea to precisely recording IH events, probably the most significant consequence of apnea. Poets and colleagues evaluated the association between IH and bradycardic events and adverse outcomes in the Canadian oxygen trial (COT) (21). Among extremely preterm infants who survived to 36 weeks’ postmenstrual age, prolonged hypoxemic episodes during the first 2–3 months after birth were associated with adverse 18-month outcomes defined as late death or disability. Secondary analysis revealed a significant relationship between IH events of at least 1-minute duration and cognitive delay, motor impairment, and severe ROP. Interestingly, bradycardia was not of prognostic significance. Our own data from the U.S.-based Surfactant, Positive Airway, Pressure and Pulse Oximetry Trial (SUPPORT) suggest that IH events of at least 20 seconds’ duration during the first 3 days of life are associated with the greatest subsequent mortality in severely growth-restricted ELBW infants (24). Clearly much more work needs to be done before these associations can be considered causal. This may require continuation and expansion of existing studies in neonatal animal models. For example, neurofunctional handicap in neonatal mice with hyperoxia-induced lung injury was exacerbated by exposure to intermittent hypoxia (25).

Over the last decade there has been greater understanding of the magnitude and potential consequences of apnea and resultant desaturation and bradycardia (26). A particular focus has been the impact of IH episodes on neurorespiratory outcomes. It is well known that BPD and delayed neurodevelopment are frequently associated and pre- or post-natal inflammation may be a common link (27). A bigger challenge is to identify appropriate strategies to enhance respiratory control and optimize oxygenation as summarized in Figure 2. While caffeine has become a successful therapy to treat apnea with long term benefits for neurodevelopmental outcome, optimal drug dosing and timing remain unclear (28). Of increasing interest in the technique of automated inspired oxygen control which shows promise in decreasing the incidence of IH episodes (29). It remains to be determined whether this and other novel approaches have longer-term benefits on the outcomes of ELBW infants. 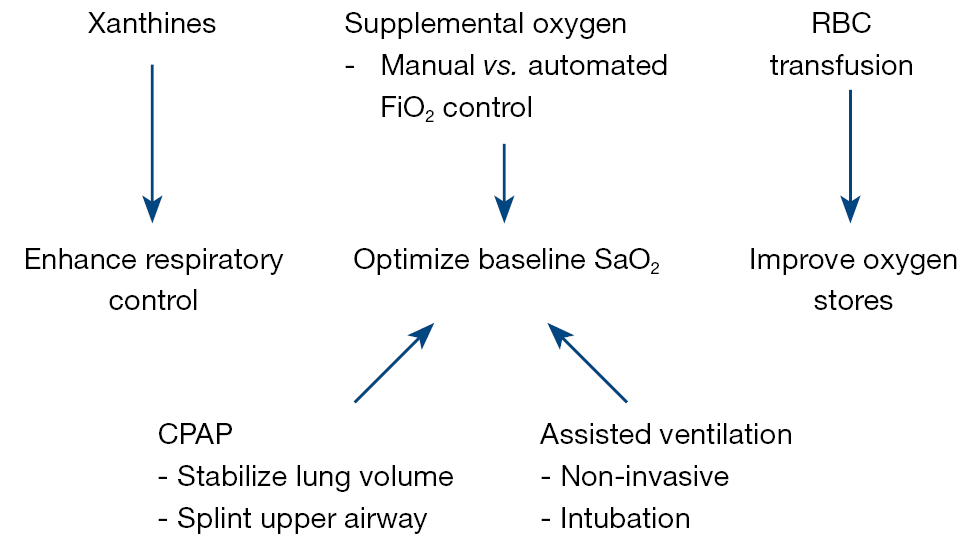 Funding: This work was supported by the NIH grant HL56470.

Ethical Statement: The author is accountable for all aspects of the work in ensuring that questions related to the accuracy or integrity of any part of the work are appropriately investigated and resolved.