Pulmonary metastasectomy in children and adolescents

Nearly a quarter of children with solid tumors has a metastatic disease at their initial diagnosis, while another 20% have a metastatic onset during or after treatment; with the most common site of these metastases being in the lung (1). The role of surgery in metastatic disease depends greatly on the primary-tumor histology. As a general rule, tumors that are refractory to adjuvant therapies are most appropriate for a pulmonary metastasectomy.

The role of metastasectomy has been actively investigated in adult patients, increasing the 5-year survival from 10% to 40–55% (2).

However, studies on children and adolescents are less numerous because of the rarity of pediatric solid tumors, and so patients with a metastatic pulmonary disease which could be considered for surgery are very few; in these selected cases indication for surgery should be evaluated by the multidisciplinary study team, in selected hospitals and institutions. Surgeons, pediatric oncologists, radiotherapists, psychologists, and radiologists contribute with their different skills to the management of pulmonary metastases. Indications to perform pulmonary metastasectomy differ according to primitive histology (Table 1). 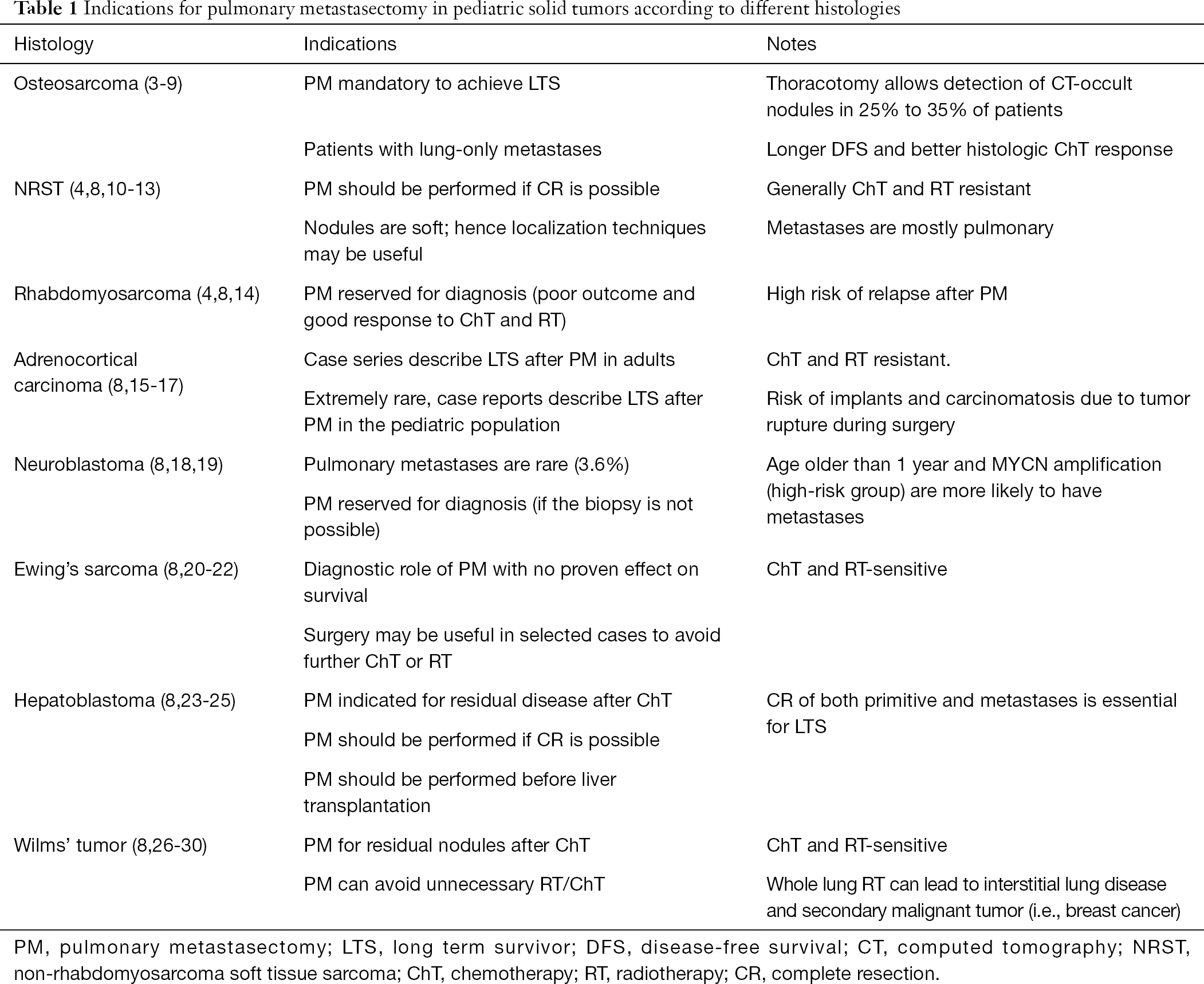 Surgical removal of lung deposits is a time-consuming, demanding surgical treatment for pediatric metastatic tumors. Single cases and few case-series experiences are reported starting from the 1950s. Case-series became numerically significant in the 1970s, and most of them included different types of tumors (31-33), and the spreading and progressive qualitative improvement of chest computed tomography (CT) led to a more sensitive preoperative identification of pulmonary nodules (Figure 1A). In this scenario, the multidisciplinary teams, with pediatric-thoracic surgeons as the main character, have accepted the idea that children could tolerate a single, sequential staged or even repeated thoracotomy (after further relapses). Lung volume loss has been faced using non-anatomic parenchymal-sparing resections (wedge or precision resections). Ranges of overall survival vary from 20% to 70% for patients with metastatic disease, depending on primary histology (Table 1). 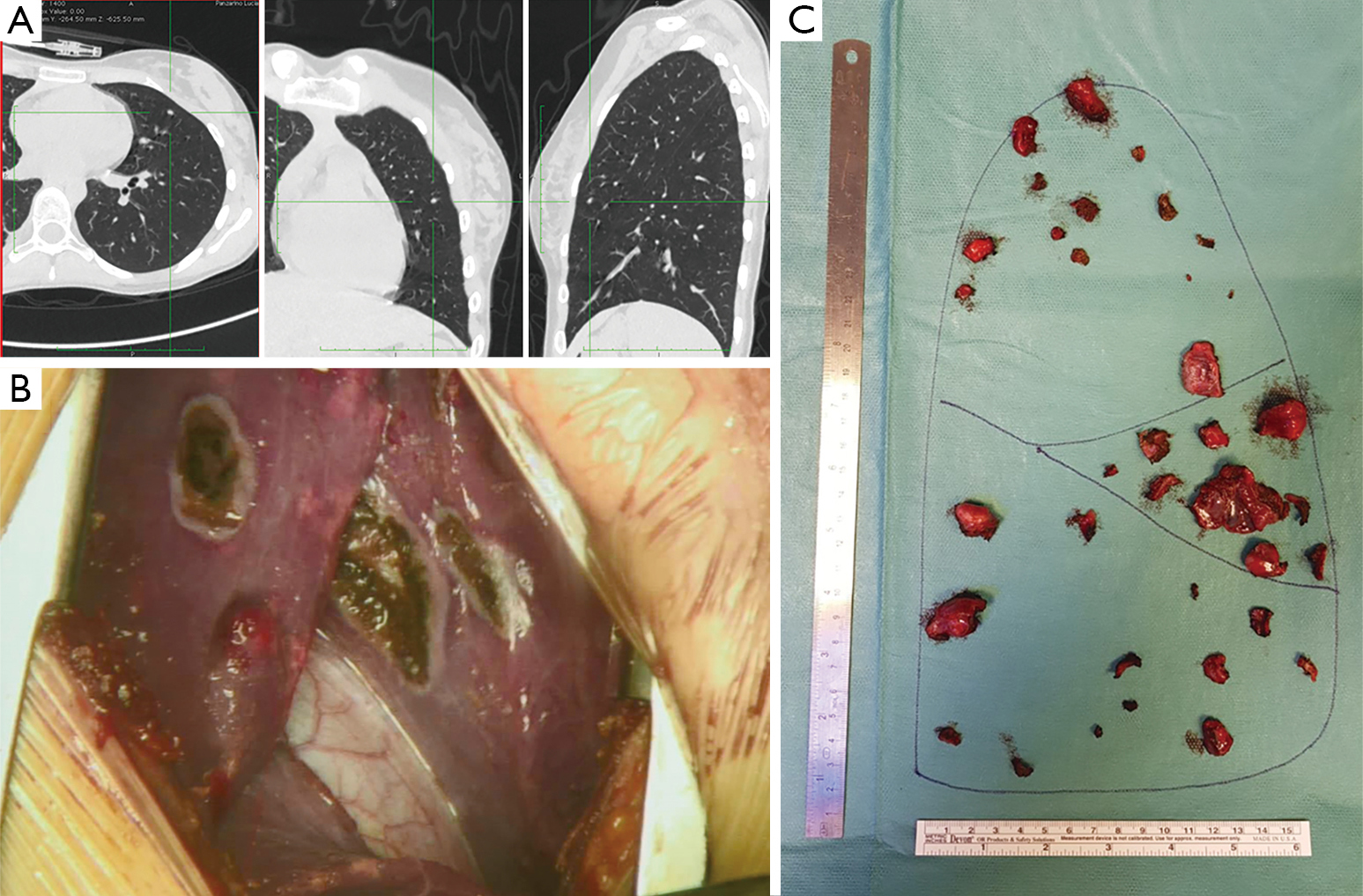 After accurate cardio-pulmonary evaluation, patients undergo general anesthesia and are intubated with a double-lumen tube in order to obtain intra-operative single-lung ventilation.

For adolescents a lung collapse is achievable with smaller double-lumen tubes, which usually requires the aid of a positioned pediatric bronchoscope. For younger children, conventional double-lumen tubes are too large, and the positioning of a bronchial blocker is preferred. The blocker is positioned under the supervision of a pediatric bronchoscope, obtaining a selective bronchial exclusion.

The complete lung’s collapse allows for the whole lung palpation and the detection of chest-CT occult nodules. In literature, different accesses to the thoracic cavity have been proposed in order to obtain a complete resection from thoracotomy to sternotomy to video-assisted thoracoscopic surgery (VATS) (34).

In our experience, we usually prefer using a minimally-invasive complete muscle-sparing lateral thoracotomy, even in cases of a planned staged thoracotomy (35).

The patient is positioned on lateral decubitus, exposing the lateral chest wall by arm abduction on an arch or a pillow.

Nodules are removed through precision resections using electrocautery or laser methods in order to ensure radical surgery with adequate margins while preserving the surrounding parenchyma, thus causing a limited volumetric distortion as compared to staplers (Figure 1B,C). Parenchymal defects are closed by single or bidirectional locked suture of 3-0 of polypropylene. When there are several resections, it is impossible to close every defect without impairing postoperative lung function and expansion. Therefore, in these patients, we prefer to close only the deeper defects leaving the more superficial ones opened, covering them with autologous fat tissue grafting, applying commercial aerostatic fibrin-glues or using patches in order to reduce the air leaks (3,36,37).

The use of staplers to perform a wedge resection should be reserved for patients with few, localized lesions. In children, the kind of stapler depends on the thickness of the pulmonary parenchyma and the cartridges. They may vary from 2.5 mm for peripheral nodules to 3.5 mm for more central wedge resections or for closing a central bronchus.

Anatomical resections (segmentectomy, lobectomy or pneumonectomy) should be reserved for selected cases since a major lung resection can only be justified if it leads to a real oncological advantage.

In the presence of pleural deposits, pleurectomy is not indicated in most pediatric tumors. When there is the suspect of pleural disease, an intra-operative histologic evaluation through frozen-section should be performed to decide whether the procedure should be carried on.

Post-operative pain control can be obtained using an epidural catheter, which can be placed before anesthesia induction or, in young children, at the end of the operation. If the epidural catheter is refused or not feasible, intravenous drugs can be administered using an elastomeric pump or by patient-controlled analgesia (PCA) in motivated and collaborative older children and adolescents (35).

Metastasectomy should be planned with the intent to perform a complete resection of all the nodules. Partial debulking is admitted only in the case of an intra-operative evaluation of non-operability after having performed an initial resection.

Repeated thoracotomies following relapses should be evaluated. In these cases, the planning of surgical intervention should be carefully considered along with the previous procedures performed with the location and characteristics of present recurrence. There is no theoretical limit for re-interventions, as feasibility depends more on residual respiratory function and on the natural history of the disease, rather than on technical difficulties; however, these cases should be referred only to specialized oncologic centers.

The only frequent issue is the management of chest tubes and respiratory physiotherapy in the presence of reduced residual lung expansion due to the iatrogenic inelasticity of resected and sutured areas. In these cases, patients can be discharged home with the pleural drainage, which can be subsequently removed in a specialist outpatient setting.

After pulmonary metastasectomy, the pulmonary function can be impaired in patients in treatment and also in long-term adult survivors, who often present restrictive syndrome and decreased physical functions (6,39). Survival outcomes vary depending on different histology (Table 1).

Surgery continues to be of paramount importance for metastatic and relapsing osteosarcoma patients and patients with metastatic soft tissues sarcomas, as well as in general for every histology patient whom are resistant to systemic treatment. Many authors have found that complete surgical resection of all sites of the disease has reported evidence to be a predictor of survival; moreover, repeated metastasectomy can improve survival or even cure some patients (4,7-9).