Truncus arteriosus communis (TAC) is a rare congenital heart defect. One arch abnormality of considerable importance consists of a large ductus arteriosus associated with severe hypoplasia or interruption of the distal aortic arch (IAA). This occurs in about 10% to 15% of cases (1) and has been considered as a risk factor for surgical mortality. It is possible to have bronchial compression as complication after the surgery with direct aortic arch anastomosis (2). The patient developed the right PA stenosis that was treated by self-expandable PA stenting at 2 months after surgical repair which then caused bronchial obstruction. We performed surgical removal of the stent and PA reconstruction at 7 months of life.

Investigations were in accordance with the ethical standards of the Helsinki Declaration of 1964 and all subsequent revisions.

A 6-day-old twin male infant weighing 2,760 g was born in our institution at gestational age 38 weeks. Echocardiography allowed the diagnosis of TAC 4A, with interrupted aortic arch (IAA), trivial truncal valve regurgitation. The truncal valve appears to be more than 75% committed to the right ventricular side of the VSD. It was IAA type B (Figure 1). 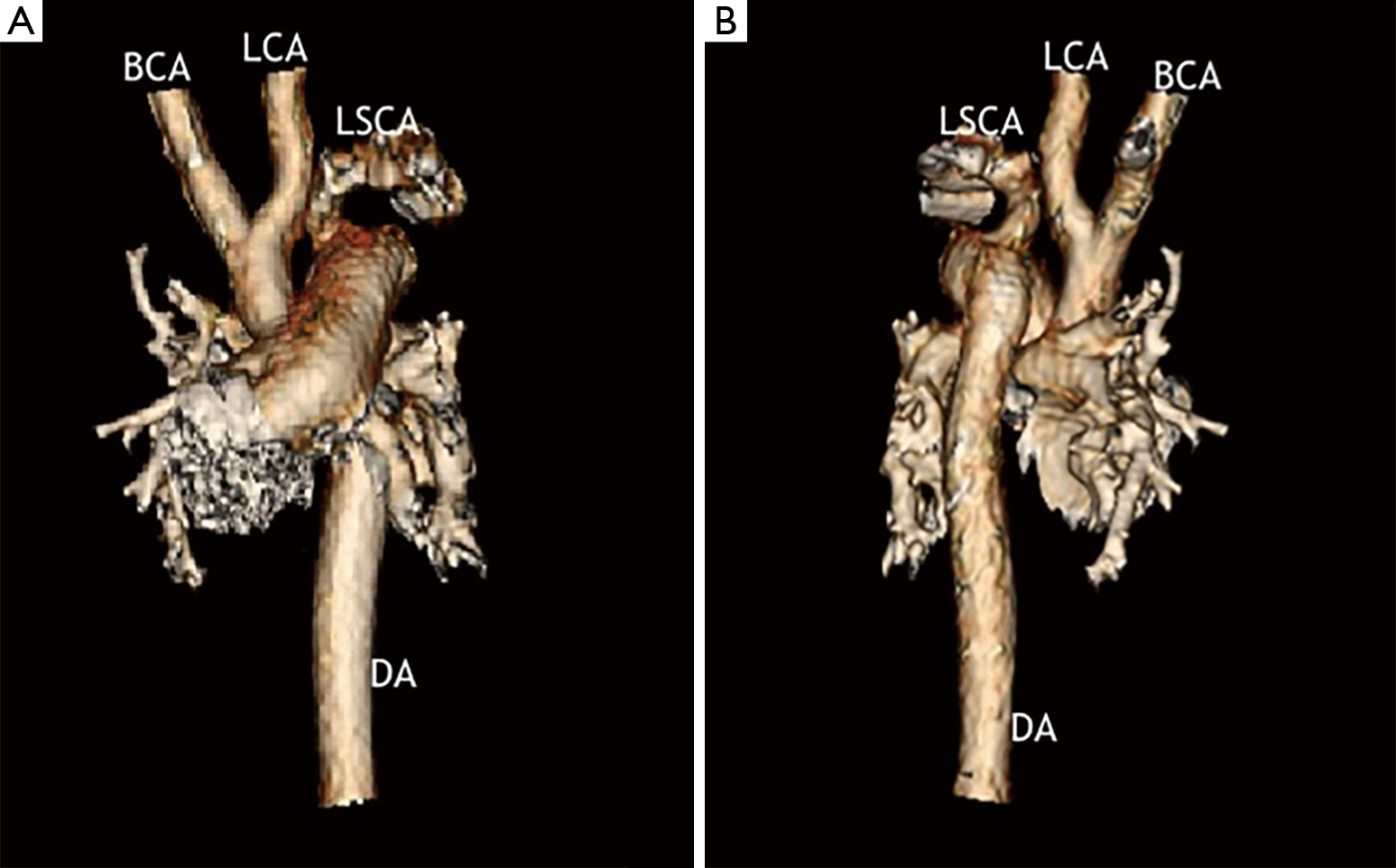 Surgical correction was performed on day 6 through a median sternotomy. Myocardial protection was realized with antegrade cold blood cardioplegia at a core temperature of 28 °C.

Right ventriculotomy was carried out and VSD was closed with Dacron patch to rerouting blood flow from left ventricle to truncal valve. Both right and left PAs were separately originated from the posterior side of the main PA and were excised en bloc and this area was patched with homograft. The ductal tissue was carefully removed, and the subclavian artery and the descending aorta were sewn to the homograft augmented main PA trunk rather than relatively small ascending aorta to avoid potential bronchial obstruction. Twelve mm pulmonic homograft was used as RV-PA conduit. The postoperative course was uneventful. The postoperative echocardiography revealed no pressure gradient at the homograft site. Follow-up echo revealed progressive worsening of pressure gradient across the proximal right PA (peak PG 70 mmHg). He underwent self-expandable stent insertion at the proximal side of the right PA at 2 months after surgery, but this caused progressive narrowing of the left main bronchus, so at 7 months of life he underwent stent removal and PA repair under cardiopulmonary bypass. The patient’s postoperative course was complicated with bronchomalacia, which required long intubation period. The patient was discharged from the hospital after 54 days admission of hospital. Most recent follow-up echocardiography at 36 months of life showed almost no right PA stenosis, mild truncal valve regurgitation and mild homograft regurgitation and excellent cardiac function.

TAC with IAA is very rare cardiac anomaly. Previous study about patients with TAC-IAA showed 12.5% early deaths among 16 patients after surgery (3). More recent report showed no mortality among 9 these patients (4).

A number of issue need to be addressed during the repair of TAC-IAA, such as aortic arch repair, right ventricular outflow tract reconstruction, and often truncal valve repair. Despite good early results, recurrent arch obstructions still develop in some patients during follow-up. The aortic arch reoperation rate in the congenital heart surgery study (5) was 13.2% (5 of 38), with the arch in most of the patients being initially repaired by direct anastomosis. Another possible major complication (2) from the direct end-to-side aortic arch anastomosis is bronchial compression. TAC-IAA has large main PA truncal segment. If the area, where the both pulmonary arteries were excised, were patched, then this main PA segment became a good conduit reaching to the descending aorta. Based on this idea, we used patch augmentation technique rather than direct anastomosis to the ascending aorta to avoid possible bronchial compression. This worked well, however, the patient developed proximal PA stenosis, which was away from the suturing line and required a balloon dilatation without success followed by stenting. We believed that stent insertion might relief his symptom and self-expandable stent (5 mm × 20 mm) could be a possible better solution. Because it has high radial force and tends to take the shape of the vessel than any other stent. It has also been reported a lower incidence of edge tears, which is related to less thromboembolic events. Follow-up IVUS analysis showed that the minimum stent area of the self-expandable stent increased by 33% at 6 months, whereas no change occurred in the balloon expandable stents; this was accompanied by a greater degree of intimal proliferation in the SE stents compared with BE stents (6). Strut malapposition can be another potential drawback, particularly if it happens in small vessels and small babies. In adult patient with acute ST-segment elevation myocardial infraction, strut malapposition at 3 days is significantly lower in SE stents than in BE stents (7). Based on these evidences, we chose SE stent in our patient. However these benefits created a potential problem in infant with bronchomalacia. We are not sure if it didn’t occur with balloon expandable stent. He developed bronchial compression with stent with progressive worsening (Figure 2). He eventually underwent surgical removal of the stent and PA repair. Postoperatively we found this patient had bronchomalacia, which required prolonged mechanical ventilation. Bronchial stent might be a solution instead of surgery (8), but in a circumstance of proximal PA stenosis surgical treatment would be a choice, particularly if we know the patient has bronchomalacia.

Based on our experiences, pulmonary artery (PA) obstruction should be carefully evaluated. Stent insertion may not have priority, particularly in patient with proximal PA stenosis, but surgical repair may be a choice in young infant with congenital heart defect.

Informed Consent: Written informed consent was obtained from the patient for publication of this manuscript and any accompanying images.