This focused issue on “Nutrition in the Critically Ill Child” is edited by Lyvonne N Tume, Frédéric Valla and Sascha Verbruggen.

Dr. Tume is currently a Reader (Associate Professor) of Child Health at the University of Salford. She holds honorary clinical contracts in PICU at Alder Hey Children’s Hospital and Manchester Children’s Hospital. She is the past nursing president of the European Society of Pediatric and Neonatal Intensive Care. Her main research interest focuses on improving nutrition in critically ill children, particularly around enteral feeding. She has an extensive publication record and is a reviewer for many journals in addition to being on the editorial board for Pediatric Critical Care Medicine and the Editor of Nursing in Critical Care.

Dr. Valla has been working for 15 years as senior consultant in the Pediatric Intensive Care unit, Lyon Children Hospital – Hospices Civils de Lyon – France. His main domain of expertise is nutrition of the critically ill child: he has launched a French speaking network in this area, and built educational programs to improve nutritional care in PICUs. He has conducted and published numerous studies in this field, together with his international network. He has co-chaired ESPNIC nutrition section, and after became the treasurer of ESPNIC.

Dr. Verbruggen works as attending staff in the Department of Pediatric Intensive Care, ErasmusMC - Sophia Children’s Hospital, Rotterdam, The Netherlands. He is a clinician-scientist focusing on nutrition and metabolism in critical illness, with a special interest on the long-term consequences for critically ill children. In 2007-2008 Dr Verbruggen worked as research fellow in nutrition and metabolism at the Children Nutrition Research Center (CNRC), and the PICU of the Texas Children’s Hospital, Houston, Texas, USA. After his return to Rotterdam, he began his pediatric clinical work in the Pediatric ICU of the Erasmus MC – Sophia children’s hospital, while continuing his research in the field of nutrition & metabolism in critically ill children. This led to his PhD “Protein, Energy, and their Interaction in Critically Ill Children” in December 2010. Together with Prof. Dr. KFM Joosten, he has established a nutrition and metabolic research unit, with ongoing research regarding nutrition and metabolism in critically ill children at the Erasmus MC – Sophia Children’s Hospital. Since 2018 he is the chair of the Metabolism and Nutrition section of the European Society of Pediatric and Neonatal Intensive Care (ESPNIC).

Disclosure:
The series “Nutrition in the Critically Ill Child” was commissioned by the editorial office, Pediatric Medicine without any sponsorship or funding. Lyvonne N Tume, Frédéric Valla and Sascha Verbruggen are serving as the unpaid Guest Editors for the series. 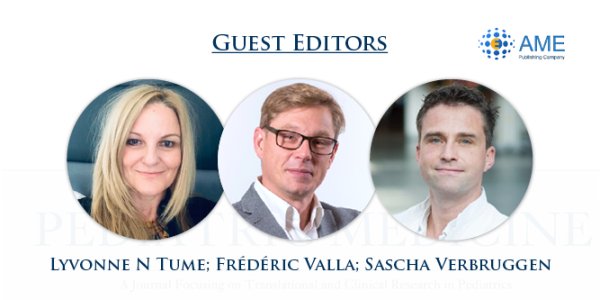