Necrotizing enterocolitis (NEC) is one of the most serious gastrointestinal diseases in neonates, especially in preterm babies. NEC associated mortality is one of the major causes of death in preterm infants (1). The incidence of NEC is high. In the United States and Canada, the morbidity of NEC in very low BW (VLBW) is about 7%, and the mortality is as high as 20–30% (2). NEC was associated with approximately 10% of neonatal deaths in the United States, and it was the third etiology of deaths in neonatal intensive care unit (NICU) (1). Although more and more extremely preterm babies survive, the number of deaths attributed to NEC is increasing (3).

Unfortunately, the pathophysiology of NEC is not exactly clear. Multi-factorial causes such as intestinal immaturity, formula feeding, hypoxia-ischemia, abnormal colonization of intestinal flora, and outbreak of intestinal unregulated immune response, lead to intestinal necrosis and multiple organs dysfunction (4-6). Low BW and prematurity were the most identified risk factors related to develop NEC (7).

The purpose of this research was to identify risk factors for NEC associated mortality in our NICU during 2015–2017, and allowing for the development of targeted strategies to avoid death.

Ethical approval was obtained for this retrospective case-control study. One hundred and sixty-three infants with confirmed NEC were included in our NICU during January 2015 to December 2017. Confirmed NEC was newborn diagnosed with NEC stage II and stage III by Bell’s criteria and modified by Walsh and Kliegman (8,9).

According to different short-term outcomes, they were divided into survival group and death group. Data in different groups included demographic, clinical, hematological, radiological, and operative details was compared for risk factors predicting mortality.

Statistical analysis was performed with SPSS-22.0. Predictive factors were identified using Student t-tests, or chi-square test as appropriate. The factors that were significantly different between the two groups in bivariate analyses were adjusted in multivariable regression models. The difference was considered statistically significant for P value <0.05.

In total, 163 cases diagnosed confirmed NEC were included during the study period. Five cases were excluded, because two were failed to follow up and three died of other causes. Of the 158 remaining infants, 52 (32.9%) infants required surgical intervention. According to different short-term outcomes they were divided into survival group (131 cases) and death group (27 cases) (Figure 1). 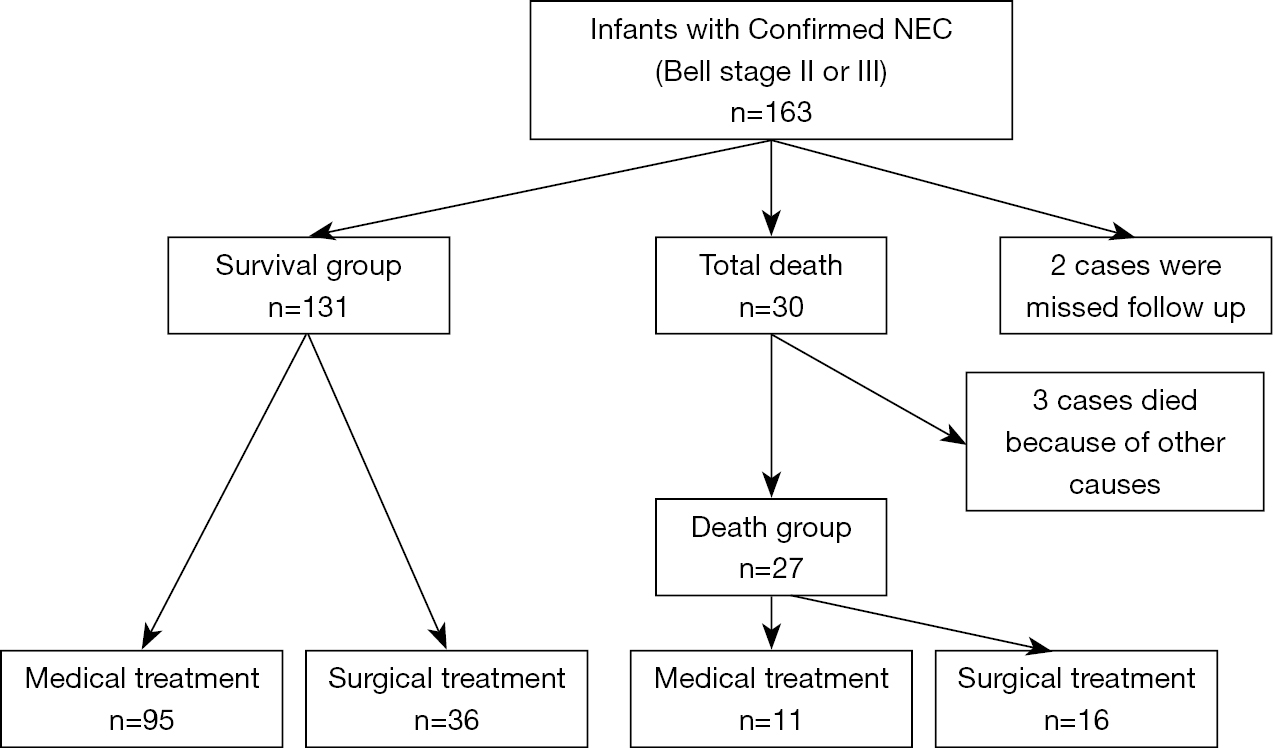 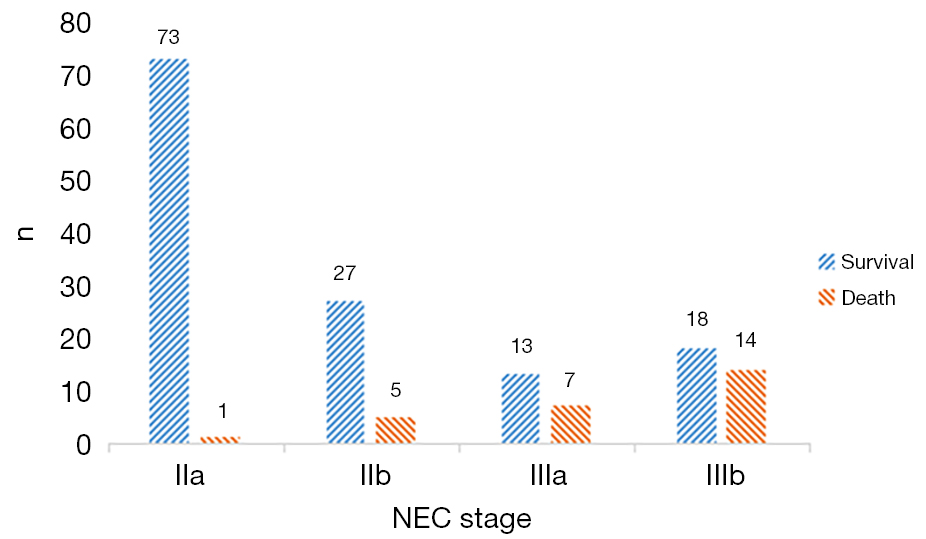 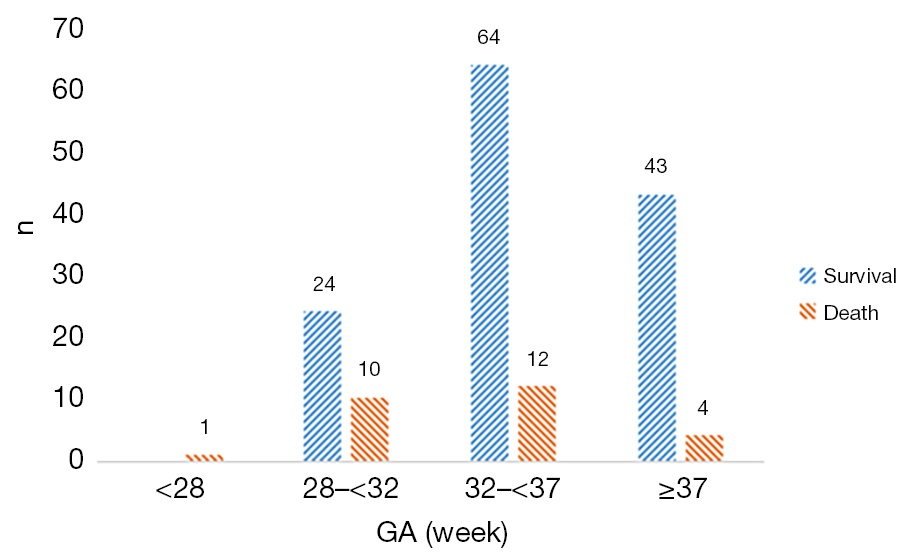 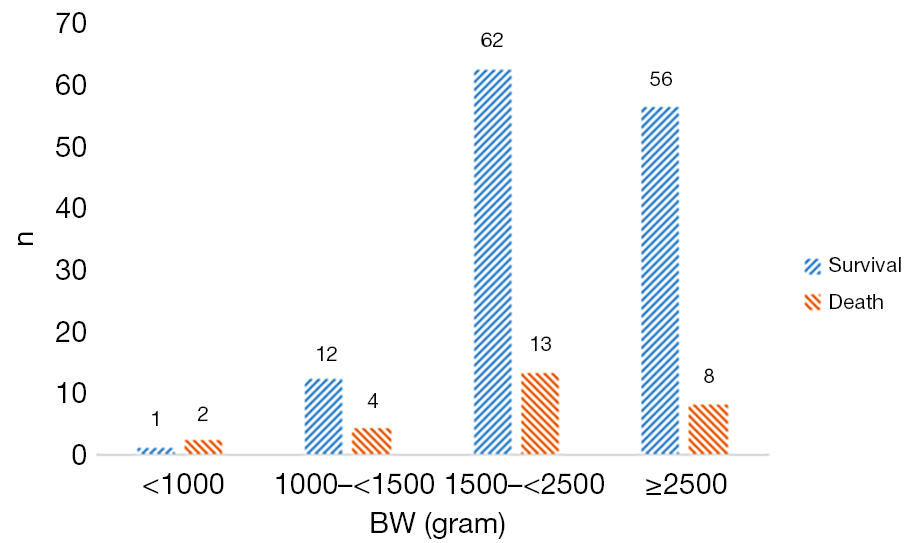 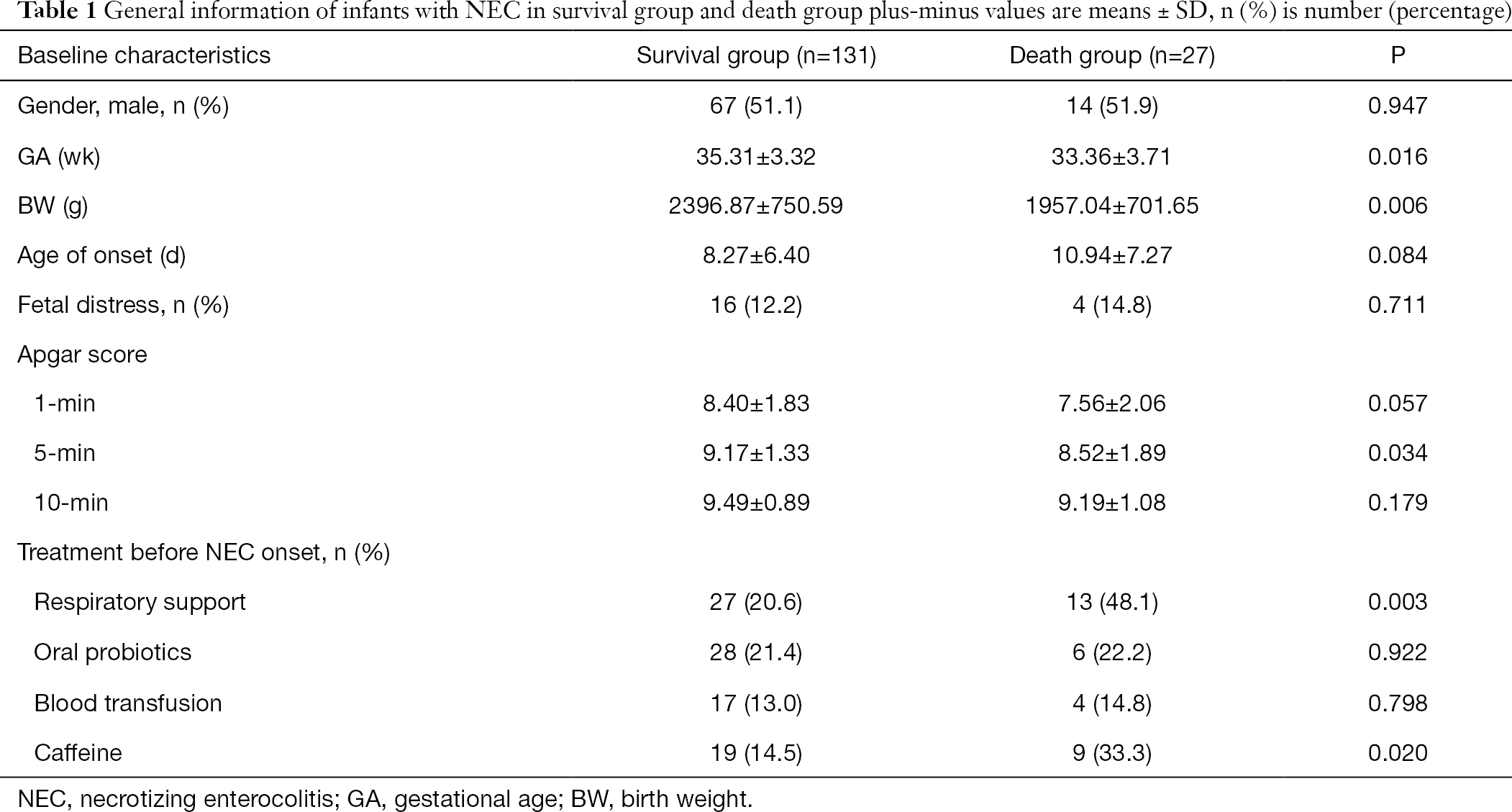 Fifty-two infants required surgical intervention. Three infants required primary peritoneal drainage, and the range of intestinal necrosis is not clear. One infant required surgery because of frequently vomiting and repeated abdominal distension in the recovered period, but there was no intestinal necrosis found in the operation, and its final diagnosis is NEC complicated with aganglionosis. Excluding above 4 infants, data from 48 cases at laparotomy were analyzed. We found that intestinal perforation or not was not associated with mortality in surgical patients, but identified a greater range of intestinal necrosis was an increased risk of death (Table 3).

Table 3 Findings of infants at laparotomy with NEC
Full table

Since the range of intestinal necrosis was unknown in medically managed infants, it was excluded from the regression models. Other factors that were significantly different between the survival and death groups were adjusted in multivariable regression models. Multivariable logistic regression analysis was performed for GA, BW, 5-min Apgar score, respiratory support, caffeine, leukopenia, thrombocytopenia, the highest CRP value, DAAS. It showed that thrombocytopenia remained a risk factor statistically significantly for NEC associated mortality (Table 4).

Table 4 OR for death in infants with NEC on survival group vs. death group
Full table

NEC is one of the most devastating diseases in neonates, it is a major cause of death in preterm infants. Onset of NEC is insidious. Initially, clinical presentations are nonspecific such as temperature instability, apnea, lethargy, feeding intolerance, increased residual gastric volumes, emesis, bloody stools, and mild abdominal distension. However, these are common in very preterm infants in NICU. NEC can progress rapidly to shock and multiple organ dysfunction in a short time.

Preterm birth is a recognized risk factor of NEC. Premature intestine has immature motility, digestion, absorption, immune defenses, barrier function, and is easily injured (11). Preterm infants with formula feeding, hypoxia-ischemia, an abnormal microbial intestinal colonization, have an excessive inflammatory response leads to intestinal necrosis. In recent years, the global incidence of preterm birth is increasing (3,12). In China, the number of pregnancy with advanced maternal age, or multiple pregnancy with assisted reproduction is increasing, therefore, the incidence of preterm birth is rising too. In this study, average GA of infants with confirmed NEC is 34.98±3.46 w, and average BW is 2,321.71±758.69 g. Compared with developed countries, the average GA of NEC infants is greater, the average BW of NEC infants is heavier. There are several reasons. First, there has less very preterm infant or VLBW hospitalized in our unit. Second, the rate of human milk feeding is lower, and we do not have human milk bank.

The rate of respiratory support or the rate of caffeine treatment was significantly higher in the death group. This may associate with GA or BW. Infants may easily have neonatal respiratory distress syndrome (NRDS) or apnea of prematurity (AOP), if they have a smaller GA or lighter BW. Duro (13) found that mechanical ventilation is a risk factor of gastrointestinal failure of children with NEC in their research. Five-min Apgar score reflects the effects of resuscitation in infants, intestinal ischemia may be more severe when the score is lower.

In the systemic analysis completed by Song et al. (14), they found that NEC patients may have thrombocytopenia, disseminated intravascular coagulation (DIC), neutrophilia, neutropenia, hemolytic anemia and some other complications. All the complications participate intestinal injury directly or indirectly, they can predict some important clues. Our study also revealed that the mortality rises with the complications as leukopenia (WBC <5×109/L), thrombocytopenia (PLT <100×109/L), and high peak value of C-reaction protein (CRP) during the course of NEC. Pourcyrous et al. (15) found that more patients lead surgical intervention and worse outcome if the CRP keeps elevating. In our study, thrombocytopenia is the independent risk factor of death in NEC patients, this result indicates that severe infection not only induces NEC, but also associated with an increased risk of death.

According to the diagnosis of NEC, we have been employing the modified Bell’s staging since 1986, which is based on the systemic symptoms, abdominal signs, and radiologic findings. From these aspects, we can also classify all the NEC patients into three stages (I, II and III), all of which could be further divided into grade A and B. As widely known, there is a close relationship between staging and prognosis. With respect to the stage IIIA and IIIB, the major difference between them is the existence of pneumoperitoneum.

Intestinal perforation or not in patients with NEC IIIA and IIIB who received exploratory laparotomy was not associated with mortality in our study, but the necrosis range of the intestinal tract is the risk factor of death, this is similar to the report by Thyoka (16). Thus, a highly sensitive and specific biomarker may be the key to modify the diagnostic criteria of NEC (2), which can improve prognosis and reduce mortality. So the researches about NEC inflammatory markers have kept popular in recent years.

In our study, the mortality of the patients who received surgical therapy is 30.8% (16/52), which is nearly the same as 38.8% (66/170) reported by Thyoka (16), both are significantly different from the 50% mortality post-surgical treatment reported by Kastenberg (17). There might be two reasons. Firstly, more than 85% of NEC cases in developed countries are extremely preterm or VLBW infants (BW <1,500 g, GA <32 w) (18), they were intolerant the disease and surgical procedure. Secondly, our study is limited in short term follow up, while the patients may have some complications such as intestinal stricture, short-bowel syndrome, recurrent NEC, cholestasis, neurodevelopmental impairment, extrauterine growth retardation, all of which will contribute to the negative prognosis. In our unit, some patients had reached the indicates of surgical intervention, but their parents refused operation because of religion or others. General and peritoneal conditions of these patients might deteriorate quickly. Finally, they missed the best opportunities for laparotomy. These tragedies remind us that we should communicate with the parents reasonably to avoid unnecessary death.

In our study, thrombocytopenia in NEC infants was associated with an increased risk of mortality. In surgical patients, greater range of intestine necrosis was associated with an increased risk of mortality, but intestinal perforation or no perforation was not related to death. NEC is a devastating disease and a leading cause of death, it is not so feasible to seek some more revolutionary therapies against NEC in the short term. Thus, we need to pay more attention to the prevention of NEC, take actions to reduce preterm delivery and encourage breast milk feeding (19) to the preterm infants. In summary, preventive measures, early diagnosis and treatment of NEC are important to reduce morbidity and mortality, and improve long term outcome for preterm babies.

Ethical Statement: The authors are accountable for all aspects of the work in ensuring that questions related to the accuracy or integrity of any part of the work are appropriately investigated and resolved. Ethical approval was obtained for this retrospective case-control study was approved by the Medical Ethics Committee of Chengdu Women and Children’s Central Hospital (No. 2018-002).