Congenital heart disease (CHD) is a leading cause of infant death in high-income countries, and affect 8 of 1,000 live births (1). In China, the prevalence of CHD is 8.2 per 1,000 live births (2). China’s birth defects prevention report in 2012 showed that CHD was in the top 10 of perinatal abnormalities in the whole country (3).

CHD is known as a disease caused by both genetic and environmental factors. With the development of genetic engineering technology, the genetic factors have been better understood in the past decade (4). The environmental factors have been studied in most of surveys: the maternal social variables such as occupation, educational background, health status, smoking and alcohol consumption habits of mother, maternal past medical history and emotional status, family history of disease, consanguineous marriages and many other factors (5-11). However, the evidences of environment factors are still limited and how these factors affect the occurrence of CHD remain unclear (12). Moreover, some Chinese pregnancy take Chinese herbal medicine in the early gestation, but it is not known if it is associated with CHD.

We undertook a multi-center hospital-based study. The participants of this case-control study were newborn infants and their parents collected from 9 hospitals in eastern China including Zhejiang, Fujian, Jiangsu, Shanghai and Shandong provinces from 2012 to 2014. In 9 sites, all live-born infants within 72 hours after birth received a screen to identify the CHD suspects, whom then further received echocardiography for diagnosis of CHD as described in our previous report (2).

The controls were defined as infants who were screened as negative and matched to date of birth (within 1 month) and delivery hospital. It took longer time to screen and diagnose CHD than the in-hospital stay before discharge from hospital (usually 3 days) for normal neonates. In order to collect data from selected controls before discharge, we asked 9 hospitals to obtain inform consent and collect data from normal neonates regularly each month according to the estimated number of CHD based on the number of births per month as well as the assumed rate of CHD.

This study was approved by the internal review board of Huashan Hospital of Fudan University, Shanghai, China (2011/285).

In each site, one senior pediatric cardiologist was appointed to recruit the cases and the controls, and to confirm participant eligibility. A senior pediatrician was arranged to be the interviewer to conduct face-to-face questionnaire survey of the parents using the standardized questionnaire during each medical institution.

The questionnaire included neonatal characteristics, maternal and paternal life style information. Neonatal demographic characteristics included child’s sex, date of birth, nationality, gestational age, Apgar score and birth weight. Maternal characteristics included education, age at pregnancy, childbearing history, family history of CHD, and maternal disease history. The maternal exposures around conception (3 months before pregnancy and the first trimester of the pregnancy) were recorded, including folic acid supplements, vitamin supplements and Chinese herbal medicine, cigarette smoking, alcohol drinking, as well as consumption of drugs. The paternal information included age, family history of CHD, smoking and alcohol consumption before or in the early pregnancy. Paternal smoking and drinking were defined based on self-report, without recording of the amount. All data entry was completed independently by two external staves by using a Microsoft Access 2003 database and was followed by logical checking and correction.

Conventional descriptive analyses were performed to summarize the several characteristics of study subjects. To estimate the association between candidate risk factors and CHDs, we used univariate logistic regression analysis firstly. Then, based on univariate analysis results, we selected eight candidate variables for backward stepwise multivariate logistic regression (Pe=0.05, Pr=0.1). The eight factors, all coded as yes/no indicator variables, were consumption of folic acid supplement before pregnancy, consumption of folic acid supplement in the first trimester, consumption of vitamin supplement in the 3 months before pregnancy, consumption of vitamin supplement in the first trimester, maternal exposure of smoke during pregnancy in home or office, paternal drinking before and in the early pregnancy, Chinese herbal medication using in pregnancy and paternal smoking before and in the early pregnancy. All statistical analyses were performed using STATA statistical software (Stata SE 11.0 for Windows, StataCorp LP, Colleges Station, TX, USA). 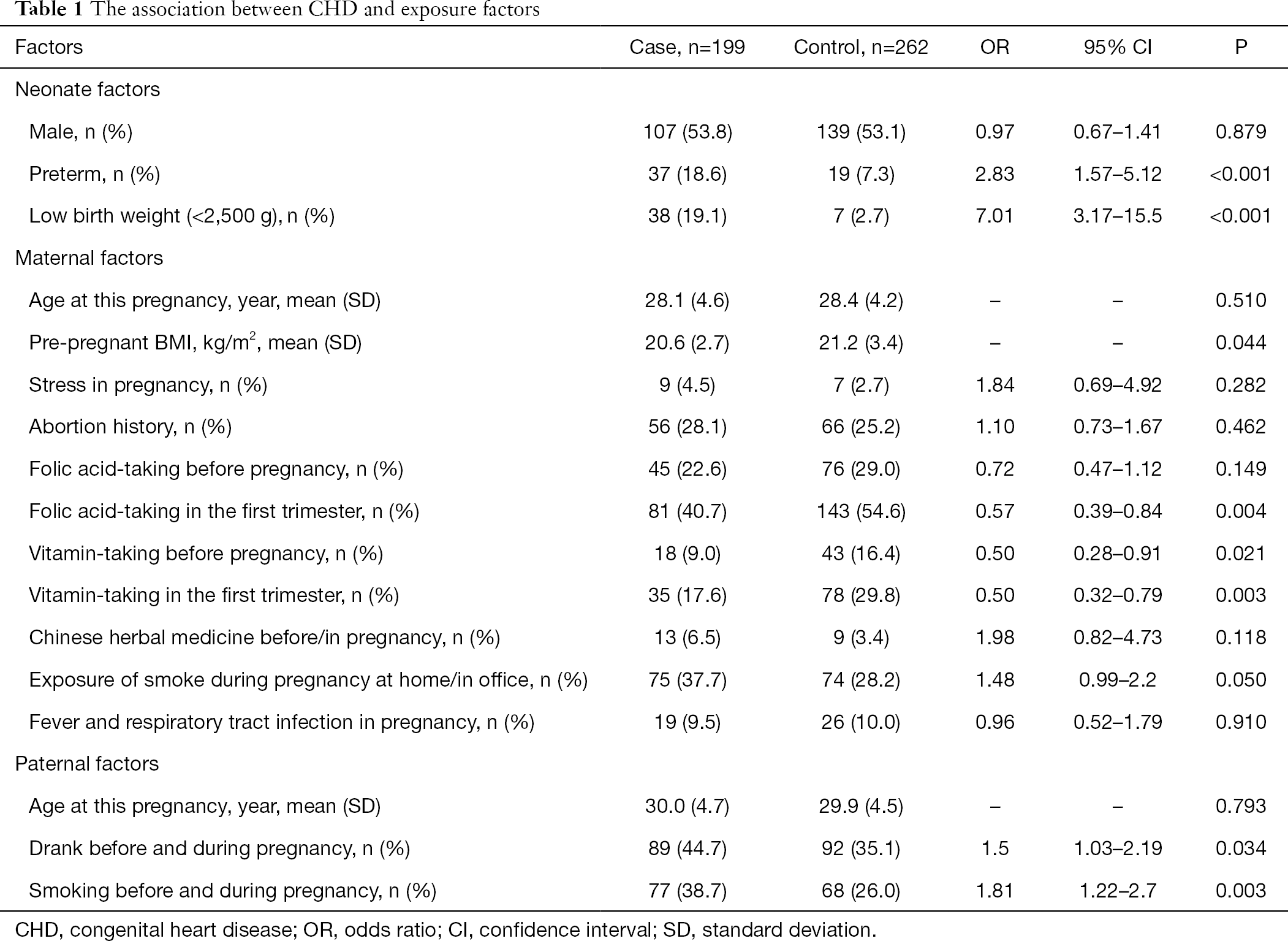 Table 1 The association between CHD and exposure factors
Full table

Of the eight variables tested in the stepwise multivariate logistic regression analysis, three showed independent associations with CHD at P<0.05 and one was of borderline statistical significance (Table 2). Adjusting for the other three exposures in the model, mother vitamin supplements (OR 0.57; 95% CI: 0.35–0.94) and folic acid-supplements (OR 0.64; 95% CI: 0.42–0.97) in the first trimester were associated with decreased odds of CHD. While, paternal smoking was associated with an increased odds of CHD (OR 1.86; 95% CI: 1.22–2.85). Chinese herbal medication use during pregnancy was positively associated with CHD (OR 3.46; 95% CI: 0.98–12.19), with a confidence interval that includes unity. 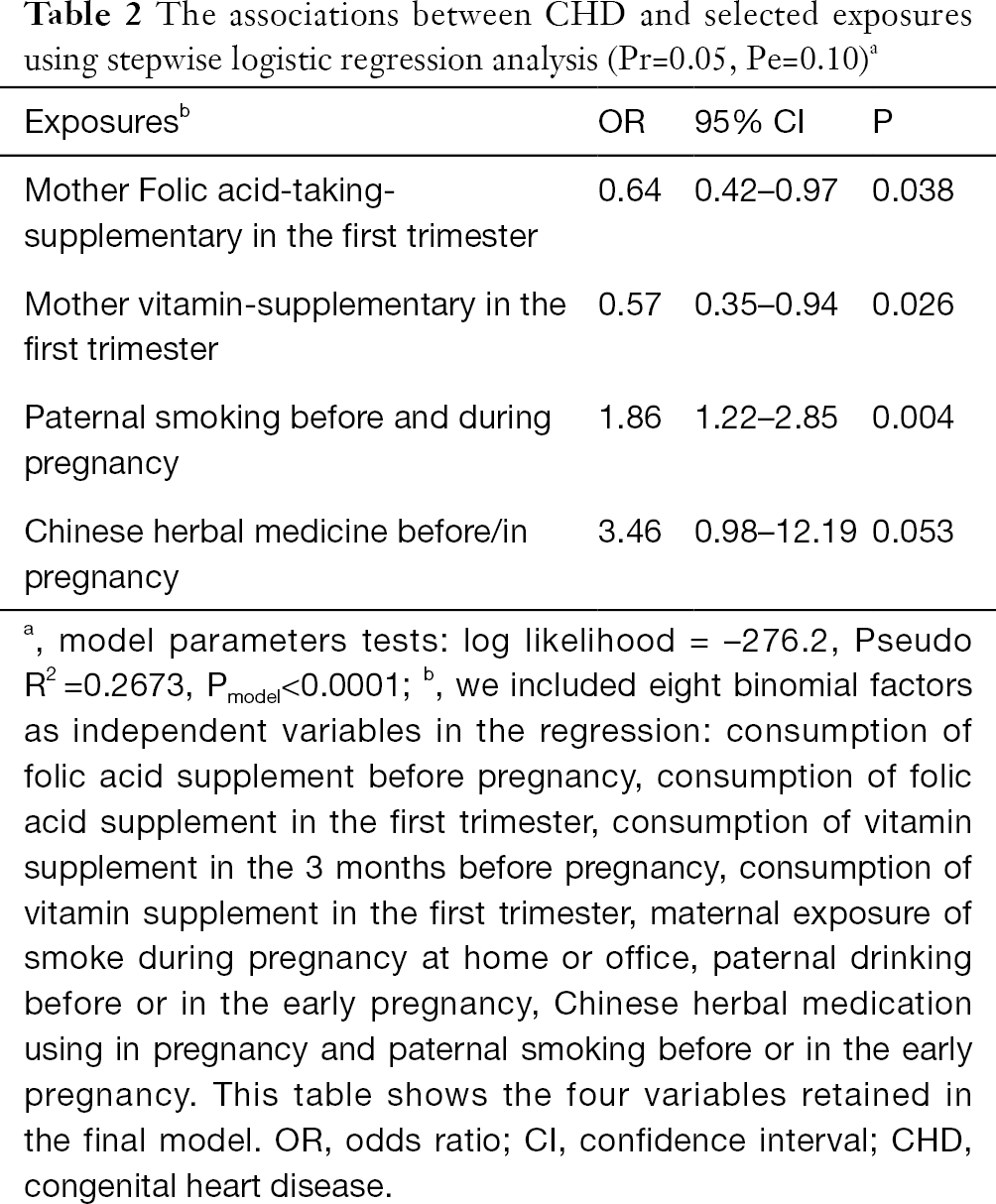 In our study, maternal folic acid supplementation during the first trimester was protective factor of CHD. Our findings are concordant with the consensus that peri-conceptional folic acid supplementation during critical periods of organ formation can effectively reduce the risk of the occurrence and recurrence of neural tube defects including CHD (13,14). The mechanism mediating the effect of folic acid deficiency on CHD are still unclear, but the relationship seems to be reasonable based on the role of folic acid in human metabolisms (15). We found Chinese herbal medication may increase risks for CHD, however the association were not significant which may due to the low response of the question in the limited small sample. This finding needs more evidence from future study. Chinese pregnancies may need to be careful in using Chinese herbal medication during gestation.

This study found paternal smoking may have effect on the occurrence of CHD, but did not show the relationship between maternal smoking and CHD. This may be expressed by the fact that most Chinese women do not smoke. In most of the previously conducted studies in other countries, maternal smoking was a common CHD risk factor. The previous studies showed that mothers’ smoking was one of the main hazardous risk factors of developing CHD in newborn infants (16,17). Our findings show that paternal smoking was a risk factor of CHD (OR 1.70; 1.10–2.63). A study showed that the teratogenic effect of paternal smoking was not transmitted by the male germ line but through the female germ line, thereby supporting the existing data that maternal exposure to environmental smoke exposure is a risk factor for heart defects (18). Patel et al. (19) displayed that peri-conceptional maternal passive smoke exposure increased the risk of AVSDs. Recent studies have also revealed that the environmental exposure of smoking during the preconceptional period was associated with some congenital malformations. Smoking would reduce the serum folate levels (20,21). While carbon monoxide of cigarettes would induce fetal hypoxia, uteroplacental circulation was impaired by tobacco reduce supply of essential nutrients for embryonic tissues, and DNA damage from polycyclic aromatic hydrocarbons (22-24). So, family must be aware of dangers from smoking on their infants’ health and keep away from cigarettes.

The current study has three strengths. First, the good representativeness of CHD case group. The use of an extensive regional grid of hospitals and clinics ensures that all cases of CHDs among live-born infants are identified. The diagnosis of each CHD case is confirmed by a team of pediatric cardiologists. The procedure of diagnosis minimized misclassifications. Second, since all subjects are neonates, the questionnaires have been completed before the mother left the maternity ward. The interval between risk factor exposure and interview is close, improving the chances that recall of exposures is accurate. The last, risk factors from maternal and paternal side are both taken into account.

However, there are limitations in our study. A case-control study design is unable to make casual inference to the identified associations between peri-conceptual exposures to the development of CHD. Second, as in any case-control study, we cannot rule out differential recall in cases and controls. Third, the interviewers were not blinded to the CHD of study subjects, which may bring some bias.

Funding: This work is supported by National Key Research and Development Program (Grant No: 2016YFC1000506), Regular Research Project granted by Natural Science Foundation of China (81570283) and Research Project on Birth Defects sponsored by Shanghai Municipal Commission of Science and Technology (13dz2260600) and the Three-year Planning for Strengthening the Construction of Public Health System in Shanghai (GWIV-24).

Ethical Statement: This study was approved by the internal review board of Huashan Hospital of Fudan University, Shanghai, China (2011/285).