Human breast milk is a complex liquid containing a large number of biological molecules and cellular components that not only provides nutrition for newborns but also facilitates immune regulation and tissue development (1). However, few studies investigated the properties of breast milk cells. With the development of new biotechnologies, researchers have demonstrated the essential roles of breast milk cells during breastfeeding (2-4).

Breast milk has heterogeneous populations including immunocytes and non-immune cells (5,6). Most of cells are immunocytes in the early stage of lactation, and then the number of immunocytes gradually reduced in the late stage of lactation (3,7). The flow cytometry determined that non-immune cells had been discovered gradually in breast milk (6,8,9). Early in the 1960s, mammary epithelial cells (MECs) in human breast milk with different cellular morphologies were found and identified as myoepithelial cells and luminal epithelial cells (10,11). Furthermore, Cregan et al. (12,13) found CK5 and NESTIN positive cells in human breast milk suggesting stem cell properties. In 2010, Satish et al. (14) found a population of cells which were positive for CD44, CD29, SCA-1 and negative for CD33, CD34, CD45 in breast milk. After being cultured with specific cocktails medium, these cells could differentiate into adipogenic, chondrogenic and osteogenic lineages. These results demonstrated that human breast milk contained mesenchymal stem cells (MSCs) (14-16). Furthermore, another study showed that breast milk had pluripotent stem cells with multilineage differentiation properties. These cells could express pluripotent markers including OCT4, SOX2, NANOG, and differentiate into three germ layers including neurons, cardiomyocytes, chondrocytes, and adipocytes (17-20).

This study was approved by the Ethics Committee of the Children’s Hospital of Fudan University. Healthy breastfeeding women (n>50) were recruited, covering lactation stages from 2 days to 2 months. The C and T milk samples were collected from day 2 to day 7 post-delivery, and the mature milk were collected after two weeks. Breast milk samples were typically collected from volunteers in the morning through a sucker (2–200 mL), stored in a unique milk bottle, and transported to the laboratory on ice.

Breast milk was diluted with equal volume of Dulbecco’s phosphate-buffered saline (DPBS) and centrifuged at 810 g for 20 minutes at room temperature. After centrifugation, the fat layer and liquid were discarded, and the cell pellet was washed three times with DPBS. Each centrifugation was performed at 300 g for 3 minutes. Finally, the cells were suspended in the corresponding medium. The total cell number and viability of each sample were determined with Countess II Automated Cell Counter (Thermo fisher) by Trypan Blue dye.

We tested the change of breast milk cell viability in vitro at four time points (2, 4, 6 and 8 hours). Before isolating the cells, the breast milk was stored at 4 °C. We collected same volume of breast milk every time point and the method of isolating cells was same as above described. The viability of cells was determined by the trypan blue dye on Countess II Automated Cell Counter (Thermo fisher).

The cells were fixed with 4% polyformaldehyde for 15 minutes, permeabilized with 0.2% Triton X-100 for 15 minutes and blocked with 10% donkey serum for 1 hour at room temperature. After blocking, the cells were incubated overnight at 4 °C with primary antibody. On the second day, the cells were washed with DPBS three times (10 minutes each time). The secondary antibody (Alexa Fluor 488 or 546, Invitrogen) was diluted with 5% donkey serum and incubated the cells for 1 hour at room temperature. Following three washes with DPBS, the slide was mounted, and the results were observed under a fluorescence microscope. Primary antibodies used were: mouse anti-CK14 (Abcam, 1:200), rabbit anti-CK18 (Abcam, 1:200), and goat anti-SOX2 (R&D, 1:500), rabbit anti-NANOG (Stemgent, 1:200).

Flow cytometry was mainly applied for the analysis of fresh breast milk and the cultured breast milk cells. The analyzed cell surface markers mainly included CD105 (BV421), CD90 (APC), CD73 (PE-CY7), CD45 (FITC), CD14 (PE), CD11c (APC), and CD44 (FITC) (all antibodies were bought from Becton Dickinson company). After isolation of fresh breast milk cells or the digestion of cultured cells, the cells were washed with DPBS for three times, followed by the incubation with diluted antibodies on ice for 30 minutes. Then, the cells were washed with DPBS three times. The acquisition of data was made with Flow Cytometer (Becton Dickinson), and data were analyzed by FlowJo software. The control of isotype group was set for all samples.

SPSS software was used for statistical analysis. In all studies, data were analyzed by independent t-test followed by Tukey’s multiple comparison tests. Statistical significance was determined at P<0.05. 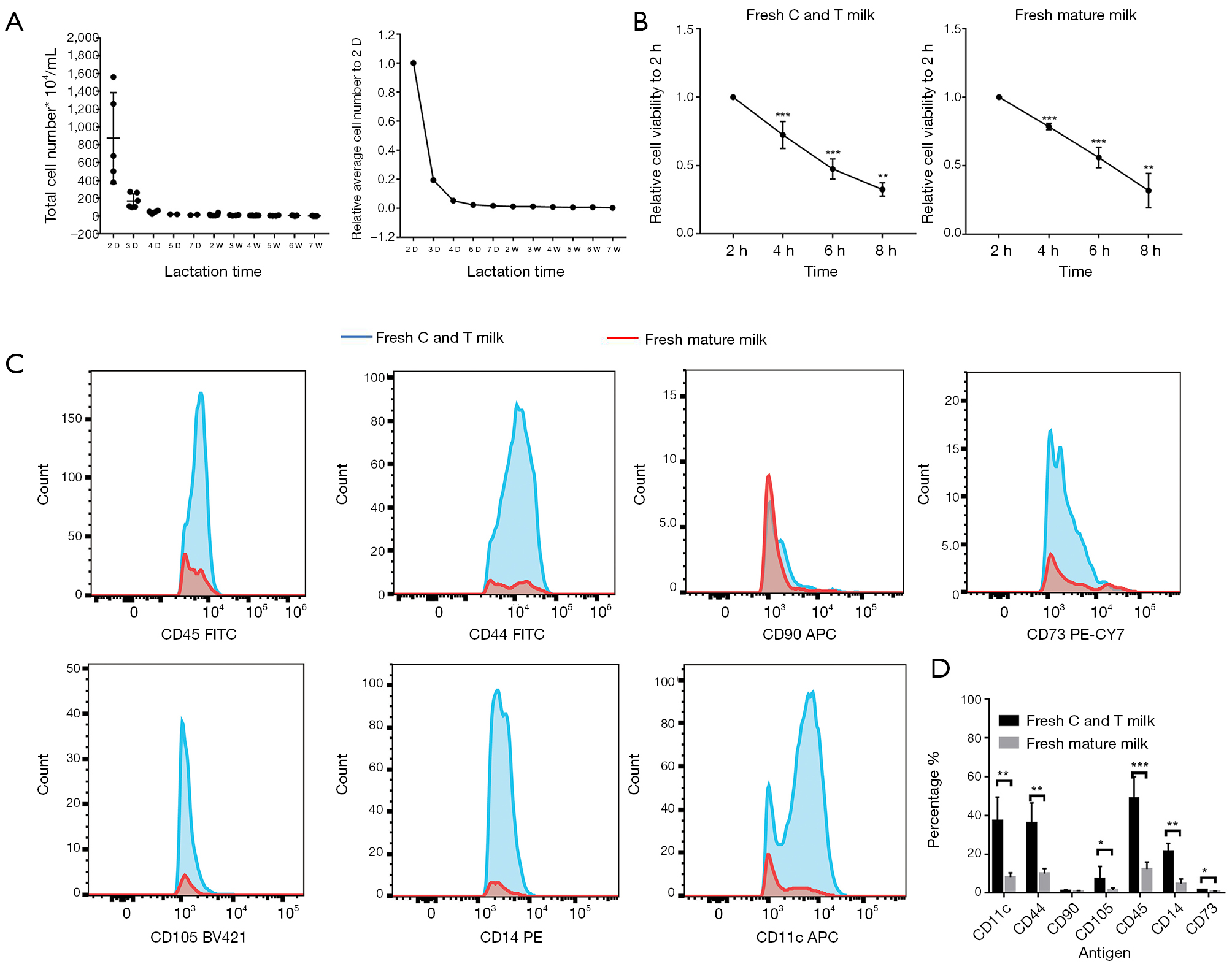 As data shown in Figure 1C,D, immunocytes and epithelial cells were the primary cells in both C and T milk and mature milk. In our further study, breast milk cells were cultured with three different media. The first medium called M medium which contained 10% FBS. The second medium contained 10% FBS and cytokines, and we called it F medium. The last one is suitable for cultural of pluripotent stem cells, which was called CM medium.

Human breast milk has a heterogeneous population of cells. In previous studies, the cells were mainly cultured in DMEM medium containing 10% FBS (14). In this study, breast milk cells were cultured in M medium. We found many adherent cells with three different cellular morphologies. Most cells were round with large nucleus (Figure 2A) while others were mesenchymal-like cells with long and thin cell body (Figure 2B) or colony growing cells with epithelial cells-like features (Figure 2C). By flow cytometry, we found that most cells with large nucleus (Figure 2A) were CD45-positive cells. Meanwhile, 98.1% of them were positive for CD11c (a marker of dendritic cells) and 3.88% were positive for CD14 (a monocyte marker), indicating these cells were mainly dendritic cells, and few of them were monocytes (Figure 2A). Further flow cytometric result showed that cells with mesenchymal-like morphology were negative for CD45 and CD14 but positive for CD90 (97.2%), CD73 (99.5%) and CD105 (50.2%) (Figure 2B). This data suggested that more than half of the cells with the mesenchymal-like morphology were MSCs. Finally, we used immunofluorescence to test cells with the epithelial cells-like morphology. Immunostaining showed clearly expression of CK18, a marker of luminal epithelial cells, in these cells (Figure 2C). The results showed that immunocytes, MSCs, and MECs appeared in breast milk cells after being cultured with M medium. 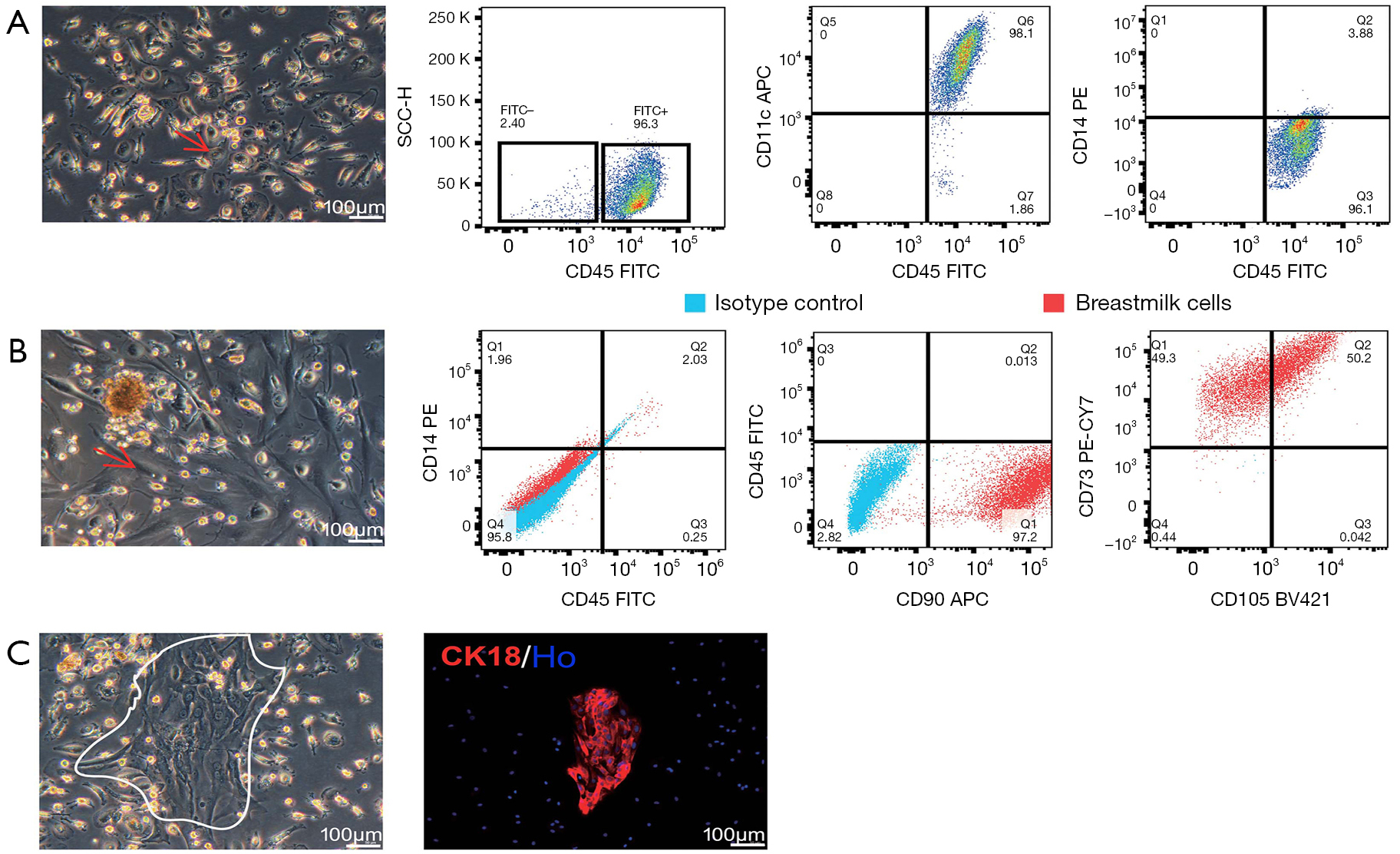 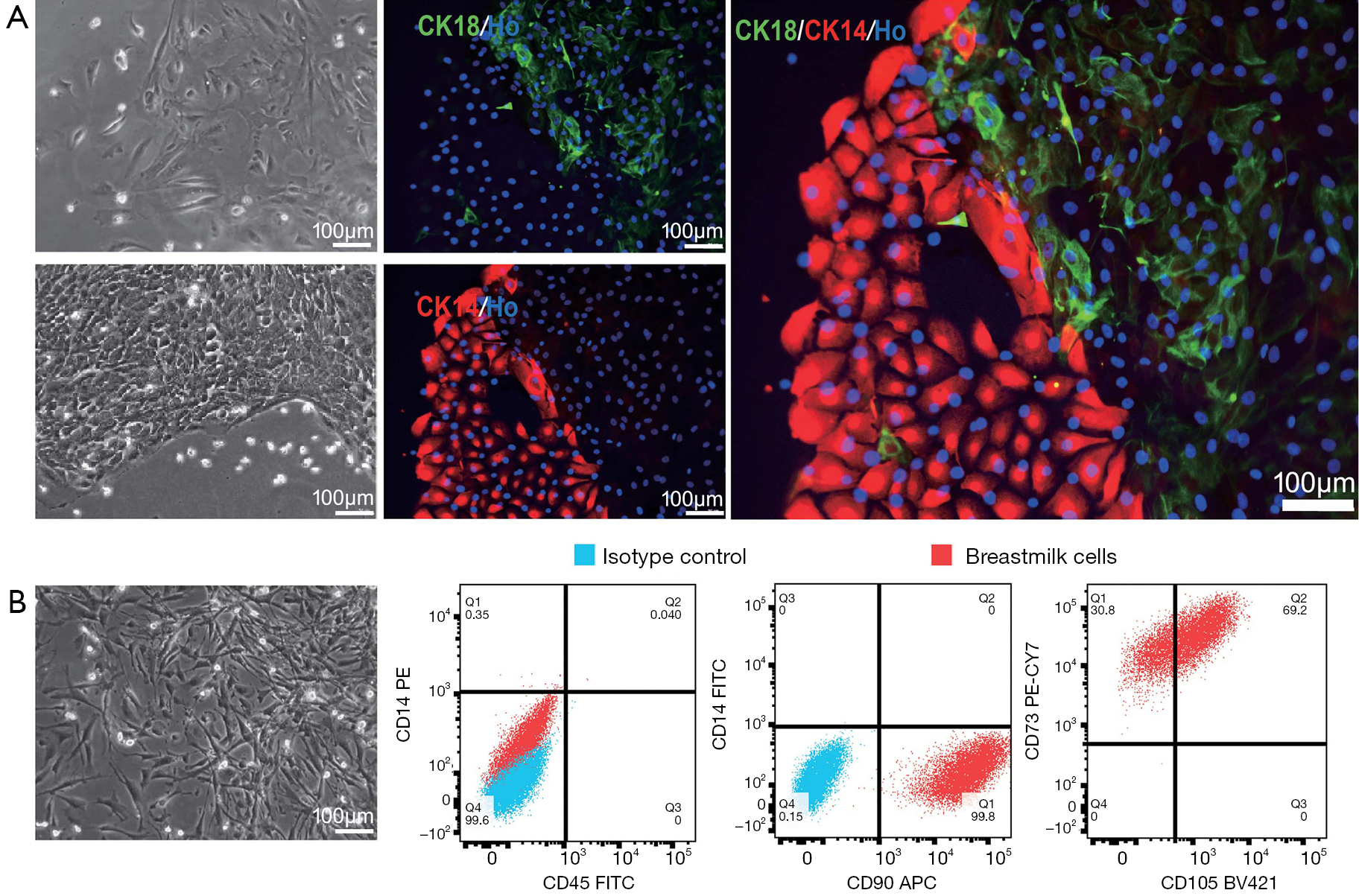 BSCs have been found in 2012 (17). To amplify these cells, we used CM medium to culture breast milk cells on feeder. Two major cell types were found with this medium. The morphologies were epithelioid cells (Figure 4A) or colony-like cells which were similar with human embryonic stem cells (hESCs). These colony-like cells were densely packed, with elevated clones in the middle (Figure 4B). Immunofluorescent staining showed that the first cell type was positive for the myoepithelial cell marker CK14 and negative for pluripotent stem cell markers NANOG and SOX2 (Figure 4A), indicating these cells were mainly epithelial cells. The second cell type was positive for NANOG and SOX2 and negative for CK14, suggesting that this type of cells had the characteristics of pluripotent stem cells. In summary, MECs and BSCs appeared when cultured breast milk cells with CM medium.

The efficiency of breast milk cell culture with different medium

We reviewed previously published papers about breast milk cell culture (12,14,17), and made some modification while we culture cells from fresh breast milk. In this study, we could get different types of cells with M, F and CM medium. Although MSCs could be cultured in both M medium and F medium, the proportion was very low, which might be caused by low expression levels of these cells in fresh breast milk. Furthermore, the proliferation rate of MSCs cultured in F medium was faster than that in M medium (data not shown). In contrast, M medium was much better for culturing CD11c+ dendritic cells than F medium. From our Table 1, 95% (40/42) samples got dendritic cells with M medium, while 0 (0/40) samples got dendritic cells with F medium. The presence of these immune cells might affect the isolation and purification of MECs and MSCs due to the large proportion. Therefore, M medium was not recommended for amplification of MECs in breast milk.

As Hassiotou et al. (17) discovered BSCs in breast milk in 2012, BSCs as a potential source of regenerative medicine might be used for diseases treatment in the future. In our study, SOX2 and NANOG positive cells were obtained after culture of breast milk cells with CM medium. However, the amplification of these cells was still tricky (data not shown). Therefore, to obtain more BSCs, the cultural conditions need to be optimized in the further study.

As different medium can obtain different types of cells, how to separate target cells from the mixture became a significant challenge. In this study, the specific cells were separated from the mixture by different tolerance to trypsin. Compared with MSCs, epithelial cells were more tolerant to trypsin and took a longer time to be digested than MSCs. In this way, these two types of cells could be separated easily by different digestion time. After several passages, the purified MSCs and epithelial cells could be obtained.

In summary, C and T milk contains more cells than mature milk. A large number of epithelial cells can be obtained by culturing breast milk cells in F medium. Both F medium and M medium can be used for MSCs culture from breast milk. In contrast, the BSCs in breast milk can be cultured with CM medium.

Funding: This work was supported by the grant from Mount Sinai Hospital (Canada) to S Lee and grant 2017ZZ01008 from Shanghai Gene Therapy Project. We are grateful to all breastfeeding mothers who participated in this research.

Ethical Statement: This study was approved by the Ethics Committee of the Children’s Hospital of Fudan University (Approval ID: 2016/137).